21 Savage is an American rapper, music producer and member of the Slaughter Gang Crew. 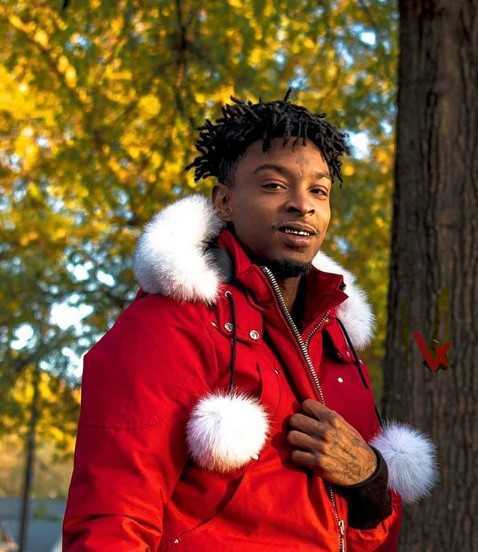 Savage was born as Sha Yaa Bin Abraham-Joseph Dominica. His nationality is British and belongs to Back descent. His birth sign is Libra.
He was raised by his mother, Heather, who is of Dominican origin, along with four brothers and six sisters, one of whom died due to a shooting after an attempted drug deal. In July 2005, he moved to the United States.
He comes from a background of poverty, struggle, crime, and violence. This pain and anger come across as a clear message in his music, do not mess with me or my people.
Regarding his education, he was Eight class graduate from High School.

Savage’s debut single “Picky” was released in late 2014 by DJ Plugg. His debut mixtape, The Slaughter Tape, was released six months later in May 2015. It spawned the singles “Skrtt Skrtt” and “Million Dollar Liq”. It also featured guest artists like iLoveMakonnen, Key! and Offset. His debut EP, Free GuWop, was independently released in July 2015 with Sonny Digital. The 7 tracked release was a tribute to rapper Gucci Mane.
Similarly, his second mixtape, Slaughter King, dropped in December 2015. It was led by the singles “Lord Forgive”, “Dirty” and “Front Door”. His collaborative EP, Savage Mode, with Metro Boomin was released in July 2016. It peaked at #28 on the Billboard 200 and #7 on the US Top Rap Albums chart. The single “X” featuring Future was certified platinum by the RIAA. The single “No Heart” sold upwards of 500,000 copies.
Furthermore, other mixtapes by Savage include Don Slaughter and Lotto Krueger. He was featured on Drake’s 2016 single “Sneakin” from the playlist More Life. He’s also worked with artists like Young Thug, Travis Scott, and Meek Mill. Savage is currently signed to Epic Records. His debut studio album, Issa Album, was released in July 2017. It features production from Southside, Zaytoven, DJ Mustard and a few others. Selected tracks from the album include “Famous”, “Bad Business” and “7Min Freestyle”. His second solo album, I Am > I Was, was released in December 2018 by Epic Records. It featured guest appearances from J. Cole, Gunna and Post Malone among others. Apart from music, he appears in films Issa Movie (2017) and YouTube animated mini-series named Year 2100.

Net Worth of 21 Savage

As a rapper and music producer, he ears huge money from his music career. His estimated net worth said to be $ 8 Million and he charges $25,000 for his every performance.

Talking about his personal life, he is probably single at present. Previously, He was in a relationship with Amer Rose, a model. In the summer of 2017, they started dating each other. But In May 2018, the couple had separated. Furthermore, He has three children; two sons and one daughter. He rarely talks about them but had posted pictures of them on his Instagram

He has a slim body with a height of 6 feet. His balance weight of 72 kg. Similarly, He has a pair of dark brown eyes and black hair. Furthermore, his body measurements are 39-13.5-32 inches including his chest, biceps, and waist sizes respectively.

Our contents are created by fans, if you have any problems of 21 Savage Net Worth, Salary, Relationship Status, Married Date, Age, Height, Ethnicity, Nationality, Weight, mail us at [email protected]