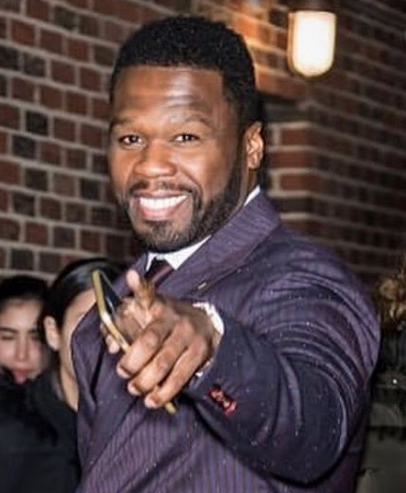 50 Cent was born as Curtis James Jackson III in South Jamaica, Queens of New York under the birth sign Cancer. He is American as per nationality and as far as his ethnicity is concerned, he is African-American. He was born to his mother Sabrina Jackson, a drug dealer in Queens, New York City, USA. He was only 8 years old when his mother died in the strange fire. This led to his father leaving him in the shade of his grandmother.

During his young age, He used to trade drugs and often brought guns and drugs to the school. Fortunately, young 50 Cent got caught by the police with cocaine, heroin, and other drugs, and from then, his drug dealer career came to an end.

After all these incidents, he adopted a nickname, 50 Cent as a metaphor to change. As per him, the name was inspired by Kelvin Martin, a Brooklyn robber.

The career of 50 Cent

50 Cent’s career started after he met with a New York hip-hop group Run. Later, he went on to create his own crew, G. With his crew containing Tony Yayo and Lloyd Banks, he published his first record, Guess Who’s Back.

This song grabbed the attention of huge rap artists like Eminem and Dr. Dre. The rapper was later signed up for their record label Shady Records and Aftermath Entertainment.

Eminem and 50 Cent collaborated together to create the 8 Mile soundtrack, Wanksta. Later, Dr. Dre mentored the rapper during the release of his debut album, Get Rich or Die Tryin. This album debuted at the first spot in the Billboard 200 of 2003.

2009 saw the release of his fourth album titled Before I Self Destruct. Animal Ambition: The Untamed Desire released five years later in 2014.

His popular singles include How to Rob, In Da Club, Candy Shop, Hustler’s Ambition, Ayo Technology, and others.

Apart from that, he is also a profound actor. He has up until now has been spotted in over 30 movies and TV shows. His latest movies include Escape Plam 2: Hades and Den of Thieves. His last televised series was in 2017 in 50 Central.

Besides, He has also an impeccable business sense. He has investments in industries such as gaming, liquor, book publishing, footwear, video games, apparel, and so on. For his first business, the rapper chose Formula 50, a Vitamin water drink in 2004. Later, he had his own film production company, G Unit Films.

Awards and Achievements of 50 Cent

In his career so far, he has been nominated for a total of One Hundred and Thirty-Five awards, out of which she has won Eighty-Six. Some of the awards he has won were as followed;

Net Worth of 50 Cent

According to Celebrity Net Worth, 50 Cent has an estimated net worth of $20 million. He earns a huge amount from his albums and singles. He also earns much from his business ventures.

While talking about his personal life, 50 Cent is loved by a lot of women. He has been in around 30 dating relationships with his girlfriends to date. However, currently, he is not dating anyone nor is he in any kind of marital relationship.

In 2006, when he was dating his girlfriend Shaniqua Tompkins, he became a father for the first time. His girlfriend gave birth to a son, Marquise Jackson. During his birth, his girlfriend asked for $50 million for nurturing the kid, but the case was turned down.

He then dated a lot of high-profile ladies including Nia Long, Dollicia Bryan, Meagan Good, Kim Kardashian, and so on. He was last seen with Tatted-up Holly for two years from 2013 to 2015.

He became a father for the second time during his dating affair with Daphne Joy. They gave birth to a daughter, Sire Jackson.

Our contents are created by fans, if you have any problems of 50 Cent Net Worth, Salary, Relationship Status, Married Date, Age, Height, Ethnicity, Nationality, Weight, mail us at [email protected]