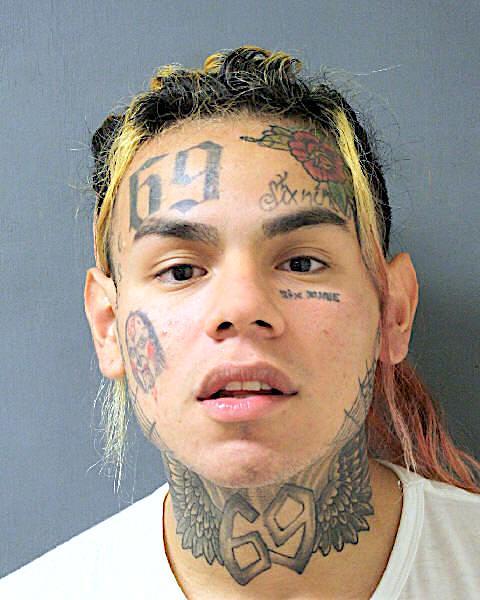 Daniel Hernandez, professionally known as 6ix9ine (pronounced as “Six Nine”) or Tekashi 6ix9ine is an American rapper from New York. He rose to prominence following his debut single “Gummo” release in late 2017. His controversial behavior, brute-force screaming technique and unconventional appearances in his songs make him one of the extraordinary rapper in the Hip-hop music industry. He has been involved in several legal issues and has faced several charges. He was sentenced to a 32-years life in prison for racketeering and firearm charges in November 2018.

Daniel Hernandez came into this world on May 8, 1996, to a Mexican mother and a Puerto Rican father in Bushwick, Brooklyn, New York. He holds American nationality. His sun sign is Taurus. Until the age of 13, Hernandez raised by both of his parents. Hernandez was expelled from school while studying in 8th grade. And he didn’t wish to continue further. His interest in achieving academic qualification has already vanished from him. In 2009, his father was murdered. Then, he grew up alongside his brother, working various jobs including selling marijuana as well. He worked all this work to support his mother financially.

Significant to his career, Hernandez started releasing his rap songs in 2014. Later, he released songs like Scumlife, Yokai and Hellsing Station. Due to his aggressive rapping styles, these songs started to draw public attention. His also used anime is in a music video, which also made his videos differently. Initially, most of his songs were released by a music label based in Slovakia named FCK THEM. Hernandez became famous over the internet to some extent. Following his fame, Hernandez became associated with fellow New York rapper Zillakam. Later the two started the feud. And the reason was,

In July 2017, Hernandez started post-Instagram picture of himself with a different eccentric appearance. His rainbow-dyed hair, a rainbow grill went viral on both Reddit and Twitter. He also inked multiple versions of the number 69 on his body. That turned him into an internet meme and rose to prominence on social media. On November 10, 2017, Hernandez commercially dropped his debut single “Gummo”. It eventually reached number 12 on the US Billboard Hot 100. The song was later certified platinum by RIAA on March 5, 2018. “Kooda”, the second single released by Hernandez debuted at 61 on the Hot 100 the week of December 23, 2017. Following the huge success, Hernandez started releasing more songs. Hernandez released his third single “Keke” with Fetty Wap and A Boogie wit da Hoodie on January 14, 2018.


Hernandez has been charged with different counts until today. In October 2015, Hernandez pled guilty to one felony count. He was charged a felony for using a 13-year-old girl in a sexual performance. The videos of the incidents were also published on the internet. Though, Hernandez claimed to have “no sexual contact” with the girl in November 2017. Under his plea deal, Hernandez must obtain his GED, refrain from posting sexually explicit or violent images or children to social media. Further, he cannot commit another such crime for two years or Hernandez would receive three years probation. If not, Hernandez could face up to three years in prison. In January 2018, the court announced that Hernandez failed his GED test. Hernandez could face three years in prison and possible sex offender registration. The hearing of Hernandez’s sexual misconduct charges is scheduled for October 2, 2018. Other than sexual misconduct charges, Hernandez served jail time as a minor for assault and the sale of heroin.

6ix9ine stands 5 feet and 6 inches tall. He has a body weight of 64 kg. He has a dark brown eye color and his hair color is dark brown. But he often dyes his hair in rainbow color.

Our contents are created by fans, if you have any problems of 6ix9ine Net Worth, Salary, Relationship Status, Married Date, Age, Height, Ethnicity, Nationality, Weight, mail us at [email protected]