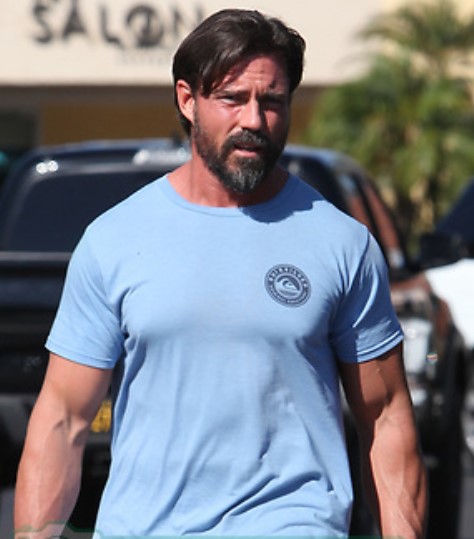 Aaron William Cameron, best known as Aaron Phypers is an American actor who has had a number of smaller roles and also a businessman who founded the Healing Centre Quantum 360.  He is famously known as the husband of the popular American actress Denise Richards. Previously, Phypers first came to the attention of the media when he married Nicollette Sheridan, the ‘and hence he has been gaining popularity. Desperate Housewives’ actress. In addition, he has appeared in TV documentary series ‘Air Emergency,’ and the short films, ‘The Leap’ and ‘The Curiosity of Penny Parker’. For a long time, he hasn’t been seen in any other film or TV series. However, currently, he featured alongside his wife Denise Richards in the TV series ‘Real Housewives of Beverly Hill’ and has been gaining popularity.

What is Aaron Phypers Famous For?

Where was Aaron Phypers Born?

Aaron Phypers was born on 16th September 1972 in Los Angeles, California in the United States and was raised by his father and mother. His mother’s name is Patricia Phypers but information about his father is not available. He has two siblings: sister Lynne Phypers and younger brother Kyle Phypers.

After completing his high school studies, he joined California State University and studied Arts. He had studied arts with the hope to develop his career in acting and after graduation, he moved to Los Angeles to be an actor.

What Does Aaron Phypers Do?

Aaron had moved to Los Angeles to be an actor after his graduation. But, he was not favored by his luck as he could not get many roles. His first role was in the documentary TV series ‘Air Emergency’ which was filmed on real-life air disasters. In the episode titled ‘Frozen in Flight’ (2009), Phypers played the role of First Officer Monreal. In the same year, he appeared in the short film “The Curiosity of Penny Parker,” where he played the role of a businessman. After two years, he was next seen as Brett in the short horror-comedy film titled ‘The Leap’ in 2011 which was directed by Mark Hanson. Since then, he hasn’t been seen in any other film or TV series. However, since 2018, he joined the American reality television series “The Real Housewives of Beverly Hills’ as a cast member. Since then, he has been picking up in his career. And his marriage to popular American actress Denise Richards is observed to be the main reason for him to get a chance to enter the RHOBH. Apart from this, there is no other information on Phyper’s upcoming projects or films

Besides acting, Phypers runs a light-and-sound healing center, called ‘Quantum 360’ which offers natural energy healing for injuries, pain, balancing organs, etc. It is said to act as a holistic medicine for many ailments. As a child, Aaron had an interest in physics and had learned at a young age that everything in the human body has a frequency. His goal is to help people re-establish homeostasis using frequency devices.

Has Aaron Phypers won any awards?

No, Aaron has not won any awards nor he has been nominated for any awards so far. However, he has been doing a great job by creating a very different healing center, Quantum 360 with an objective to promote optimal health in mind-body-spirit with the use of advanced technologies and non-invasive health practices. Hence, we can give credit to his work at least.

To whom Aaron Phypers is married?

Aaron Phypers is a married man. He has married twice. He was married to popular American Nicollette Sheridan in 2015. However, the marriage did not go well and after 6 months of marriage, they filed for a divorce. After two years of separation, his divorce from Nicollette Sheridan was finalized in August 2017.

Aaron met Denise Richards while visiting his clinic in Malibu to help her with DNA repair and anti-aging. Eventually, Aaron was often spotted with Denise Richards, even before finalizing his divorce. They started dating each other in December 2017 and made their relationship official on Instagram. They officially engaged in September 2018 and decided to get married within a week. They exchanged their vows in a beachside, close-knit ceremony on September 8 in Malibu. They are happily married. Further, they were planning to adopt a child. Going through his Instagram, it seems that they have already adopted a daughter named Eloise Joni Richards whom Denise had adopted in 2011.

How tall is Aaron Phypers?

Aaron Phypers is 47 years old as of 2020. He stands at a height of 6 feet 2 inches and weighs 85 Kg. Similarly, he has the mesomorph body type and his body measurement includes chest size, arms size, and waist size as 42 inches, 14 inches, and 36 inches respectively. In addition, he has brown eyes and brown hair. Moreover, his shoe measure is 11 (US) but his dress measure is not updated.

How much is Aaron Phypers worth?

Meanwhile, his wife Denise has a net worth of $12 million. It seems the couple is enjoying their net worth and living a lavish life at the moment. Moreover, the American actor is also a huge fan of the bike. He owns many expensive bikes until now. So far, he holds the Indian motorcycle Spring Dark Horse Model, which costs about $21,000.

Our contents are created by fans, if you have any problems of Aaron Phypers Net Worth, Salary, Relationship Status, Married Date, Age, Height, Ethnicity, Nationality, Weight, mail us at [email protected]