Adam Vinatieri is an American football placekicker who currently plays for the Indianapolis Colts of the National Football League. 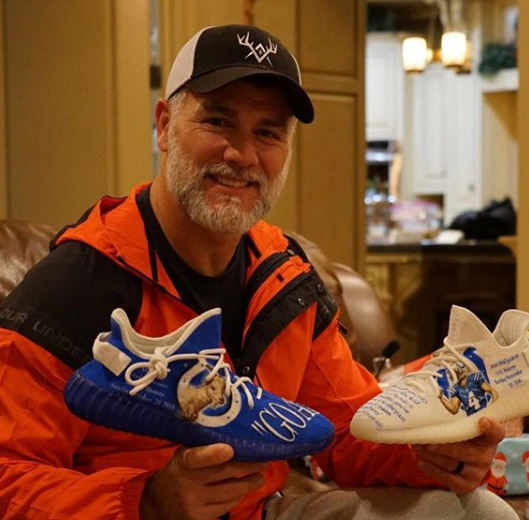 Adam Vinatieri is an American football placekicker who currently plays for the Indianapolis Colts of the National Football League. He is considered as one of the best placekickers in the league. Recently, he renewed his contract with the Colts for one-year.

Famous athlete Adam Vinatieri was born to Paul Vinatieri and Judy Vinatieri as Adam Matthew Vinatieri. His father who works for an insurance company made his children learn all kinds of sports since small age. Being a second child of the family, he grew up in Yankton, South Dakota and later moved to Western South Dakota along with his family, where his family still resides.

Talking about his education, He attended Central High School in Rapid City where he excelled in football, wrestling, basketball, soccer, and track. He earned first-team All-State honors as a senior in football.

He then enrolled in the United States Military Academy at West Point but decided to return home and got enrolled in South Dakota State University. He finished his college career as the University’s all-time leading scorer with 185 career points as well as being awarded first-team-all-conference honors numerous times.

His professional career was started from World League of American Football which was rebranded as NFL and served there as the placekicker and punter.

Prior to the 1996 season, he was signed by New England Patriots in South Dakota State. He became a confident athlete by high school, all credit goes to his parents who encouraged their children to engage in sports. He was a rookie placekicker in the New England Patriots. For the first ten years of his career, he played in New England. Then in 2005, he left NFL without a contract and signed with the Indianapolis Colts in 2006. In 2007 season, he appeared in all the games and kicked his 20th game winning FG this year. Previously he had signed a five-year contract with the colts and renewed the contract on March 8, 2016, for further two years. At present, January 25, 2019, Vinatieri signed a one-year contract extension with the Colts.

Awards and Achievements of Adam Vinatieri

He has received several awards and recognition for the work he does are follows:

Net Worth of Adam Vinatieri

Adam Vinatieri has earned $47,256,999 in his 23 seasons playing for both New England Patriots and Indianapolis Colts. He also earns a significant amount of money through endorsements and sponsorship.

According to Celebrity Net Worth, Adam is worth only $10 million but considering his earnings during his 23 seasons, we can estimate that he is worth way more than $10 million.

His personal life is as perfect as him and his career. He was dating his girlfriend Valeri Vinatieri before the couple decided to get married and live happily as husband and wife. The couple tied the knot in the year 2001 and till now there have been no rumors whatsoever of their divorce. He is not gay at all as he has a total of three children; AJ, Gabriel, and Allison. He is a perfect husband and a perfect father and he takes great responsibility of them.

Adam Vinatieri has an athletic body build with an attractive personality. He has a charming smile which attracts a lot of people to him. He stands 6 feet tall and weighs 95 kg. His other body measurement such as weight and more will be updated soon.

Our contents are created by fans, if you have any problems of Adam Vinatieri Net Worth, Salary, Relationship Status, Married Date, Age, Height, Ethnicity, Nationality, Weight, mail us at [email protected]