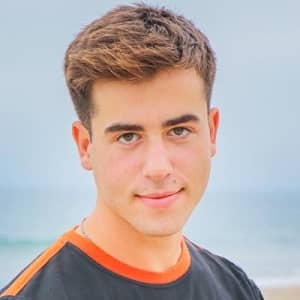 Adi Fishman is a popular American Youtuber. He has gained massive popularity on the platform and is well known by fans due to his funny prank and challenge type videos.

When was Adi Fishman born?

Adi Fishman was born on the 11th of August, 2000 in Los Angeles, California, U.S.A. As of 2020, his age is 20. His nationality is American and his ethnicity is Caucasian.

Adi has not revealed any details regarding his parents, not even their names. However, we do know that he has two siblings, an unnamed sister and his Youtuber brother, Tal Fishman.

He also has not revealed much about his education and fans are left to speculate where exactly he studied. Though we don’t know where he studied, we can safely assume that he is well educated just by watching one of his videos.

How did Adi Fishman build his career?

Adi started his career on Youtube by uploading some comedy skits he made with the help of his brother. These skits were loved by a lot of fans and their channel Tal and Short channel started growing. Since then, Adi has created a new self-titled channel which has over 1.9 million subscribers.

His sense of humor and energetic personality make him enjoyable to watch and this is a major reason for his Youtube success. Adi’s videos are mostly pranks and challenges, with a few vlogs mixed in between.

Adi collaborates frequently with his brother Tal Fishman. These collaborations are very popular with fans and both Adi and Tal are seen on each other’s channels frequently. On top of this Adi also has a second channel he shares with his girlfriend Emily. This channel is named Adi&Em and as of now, it has 391k subscribers. The content here is mostly the same as his main channel, but it’s a lot more focused on their relationship.

What is Adi Fishman’s net worth?

As of 2020, Adi Fishman has an estimated net worth of approximately 600k U.S. dollars. He has not revealed his annual salary as of now. But based on his Youtube channel’s popularity, he surely earns a lot.

What are the physical statistics of Adi Fishman?

Adi is a handsome individual with a fit and muscular physique. He is also blessed with blue eyes and light brown hair. Other than this, he has not revealed his exact height or weight yet.

Who is Adi Fishman dating?

Adi Fishman is currently dating fellow Youtuber Emily Alexander. They have been in a relationship for quite some time now and Emily is constantly featured on Adi’s channel. The couple is loved by fans and they constantly upload videos of them pranking each other or trying challenges together. Their relationship is a happy one and as of now, there are no signs of them breaking up anytime soon.

Adi Fishman is active and very popular on social media. He uses these platforms to update his fans on his next videos, and also on his personal life. He has amassed a lot of followers on both platforms due to his good looks, popularity on Youtube, and energetic personality. As of 2020, he has over 834k followers on Instagram, over 7.6k followers on twitter, and over 1.8 million followers on Facebook.

Our contents are created by fans, if you have any problems of Adi Fishman Net Worth, Salary, Relationship Status, Married Date, Age, Height, Ethnicity, Nationality, Weight, mail us at [email protected]