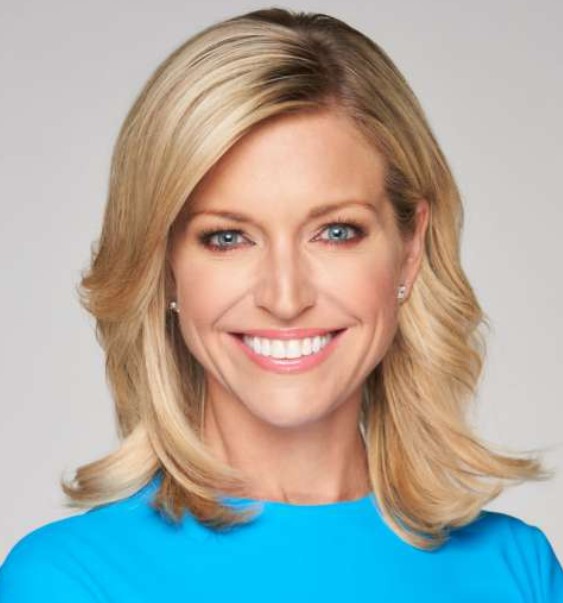 Ainsley Earhardt is an American television personality and author who is well-known as the co-host of the newstalk program aired on Fox News Channel, “Fox & Friends”. It is the same popular show that is enlisted as President Donald Trump’s favorite morning show program. She also reports for the show “Hannity” in her own segment called “Ainsley Across America”. Earhardt is also known for her contribution to FNC New Year Eve Special “All American New Year” in 2014. She has also authored a children’s bestseller book titled “Take Heart, My Child–A Mother’s Dream”.

What is Ainsley Earhardt Famous for?

Where was Ainsley Earhardt Born?

Ainsley Earhardt was born on September 20, 1976, in Spartanburg, South Carolina, United States. Her birth name is Ainsley Earhardt. Her nationality is American. Earhardt belongs to White ethnicity while Virgo is her zodiac sign.

She then earned leadership and academic scholarship to study at Florida State University(FSU) with biology as a major, during which she served the student body as a senator. She was also a member of the Alpha Delta Pi, and Beta Epsilon in USC, and was inducted into four honor societies during her days at FSU.

She then transferred to the University of South Carolina where she graduated with a bachelor of arts degree in Journalism in 1999. While she was attending USC, she was hired as a reporter for WLTX which she served as morning and non-anchor for 4 years till 2004.

In 2007, she won the University of South Carolina’s Young Alumni Award as she was named the School of Journalism and Mass Communication’s 2007 “Outstanding Young Alumna”.

Wha Does Ainsley Earhardt Do For Living?

Ainsley Earhardt began her professional career as a reporter at WLTX during which she even traveled to New York City after the September 11 attacks to cover the South Carolina middle school students’ raising money for firefighters. For her contribution, she was named the Best Personality Of The Year in Columbia Metropolitan Magazine.

Earhardt then moved to New York City where she began working at Fox News Channel after she was hired by Roger Ailes in 2007. She has also appeared on Hannity with her own segment called “Ainsley Across America”.

Starting her job as a curtain-raiser, she became a co-host of “Fox & Friends” in 2016. One of her major assignments at Fox was an interview with Trump, days before his inauguration as the president.

During the COVID-19 pandemic, Earhardt encouraged readers to go flying and even claimed that the media were making the coronavirus pandemic “political.”

Earhardt has also written two children’s books “Take Heart, My Child”, one of the best-selling books, and “Through Your Eyes” and a memoir, ‘The Light Within Me”.

Who is Ainsley Earhardt Married to?

Ainsley Earhardt has married twice to date. Previously Earhardt got married to her first husband, Kevin McKinney in April 2005, however, their relation didn’t last long and they ended in divorce in 2009. Shortly after in October 2012, she got married to her second husband Will Proctor. Will is a former Clemson University quarterback with whom Earhardt shares a daughter named Hayden.

They were living together until October 10, 2018, when Proctor filed for divorce from Earhardt amid allegations he was unfaithful and finally got divorced in 2019.

In 2020, it was reported that Sean Hannity, a popular Fox News host and conservative political commentator and Ainsley, has been quietly dating for years. She also has been recording at Hannity’s home studio on Long Island, New York, and is renting a home nearby. Besides,  she even rode on Hannity’s helicopter with him last August to the wedding of another Fox News host, Pete Hegseth.

How much is Ainsley Earhardt worth?

Ainsley Earhardt has quite great earnings from her professional career as a news anchor on Fox News channel. Working in this field for over 5 years, Earhardt has eagerly stood up among several news reporters and has managed to amass a million worth fortune from her shows.

Her net worth is estimated to be around $6 million while her annual salary is around $2 million.

How Tall is Ainsley Earhardt?

Ainsley Earhardt is a gorgeous lady who looks stunning even in her 40s. Earhardt has a well maintained slim body physique of measurement 35-24-36 inches. She stands tall with a height of 1.73m while her body weighs around 53kg. She has a fair complexion with blonde hair and blue eyes.

Our contents are created by fans, if you have any problems of Ainsley Earhardt Net Worth, Salary, Relationship Status, Married Date, Age, Height, Ethnicity, Nationality, Weight, mail us at [email protected]