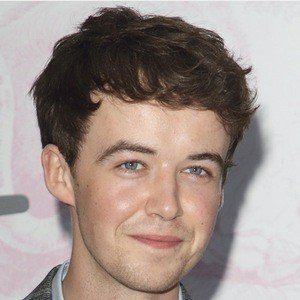 Alex Lawther is an actor, television Actor, Theatre Actor & radio Artist from England. The star is most famous for his brilliant performance as the young Alan Turing in the Academy-Award-winning film, ‘The Imitation Game’. His strong performance is reflected in the Channel 4 series ‘The End of the F***ing World’ where he portrayed the role of James.

Where was Alex Lawther born?

Alex Lawther was born on May 4, 1995, in Petersfield, Hampshire. As of 2020, his age is 25. He was born as the youngest of three children to his parents. Even though Alex hasn’t revealed his parents’ name, his parents are lawyers. The actor holds British nationality and falls under the Taurus sun sign. He grew up alongside his older brother Cameron Lawther and elder sister Ellie Lawther. Cameron is a film producer himself whereas Ellie works at public policy.

Talking about his educational achievement, he went to High School at Churcher’s College. He later graduated from a University in London, England.

How did Alex Lawther pursue his career? Rise to Stardom

Alex Lawther was keen on acting since his early childhood. He debuted in his acting career at the age of 16, by featuring as John Blakemore in David Hare’s play ‘South Downs’. Alex didn’t make his debut in feature films until 2014 with the historical thriller, ‘The Imitation Game’. Everybody on the set was shocked as they paid attention to his brilliant performance. His performance didn’t only earn him critical acclaim and the London Film Critics’ Circle Award but also helped him to emerge as a better actor.
It was the year 2015 when he starred in the drama film ‘X+Y’. There he played his first lead role as Elliot in Andrew Steggall’s film ‘Departure’ along with his co-actor Juliet Stevenson. And the same year, he played the lead role of Kenny in ‘Shut Up and Dance’.
As he made an even bigger name for being an actor, he received an offer as James in the television series The End of the F***ng World, alongside Jessica Barden. The show was two seasons and he has starred as James in both of them. His performance has been applauded by many and the show has been received very positively by critics and viewers.

How much net worth does Alex hold?

Working as an actor was not always easy for Alex. Alex even stated in an interview. Despite his such performances, he recognized himself as an actor only when he started earning enough money to pay his own rent and taxes. Now as a successful actor in the industry, he is sure to earn a decent amount of money out of his career. According to several media sources, he has a net worth of about $2million.

How tall is Alex Lawther?

The handsome actor stands tall at a decent height of 5 feet 9 inches and weighs about 65 kilograms. Talking about his physique, he has a slimly built body and mentions wearing a shoe size of 8 UK. Moreover, he has a pair of bluish-green eye color and brown short hair.

Is Alex dating anyone?

Alex Lawther is currently single. The actor seems very busy working on his acting skills and his next projects. There is no hint on his social media profiles about the issue too.

During the past, there are speculations about him being gay.  However, there has not been any clarification from him. Speculations could just be speculations.

Alex is very active on his social media platforms such as Instagram and Facebook. On Instagram, he is under the username @jameslawthers, where he has garnered about 224k fan followers. Similarly, his Facebook profile has about 81,575 people follow it. He isn’t available on other platforms such as Twitter, Tik Tok, and YouTube. However, we can view several fan pages referring to him on the platforms.

Our contents are created by fans, if you have any problems of Alex Lawther Net Worth, Salary, Relationship Status, Married Date, Age, Height, Ethnicity, Nationality, Weight, mail us at [email protected]