Ally Brooke is an American singer, best known as a member of the girl group Fifth Harmony. 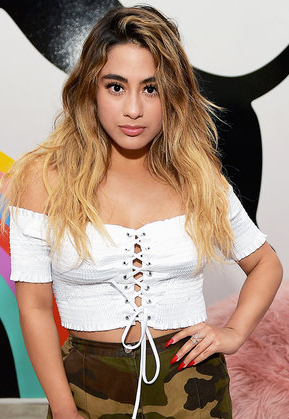 An American singer, best known as a member of the girl group Fifth Harmony, which was formed on the second season of The X Factor US in the year 2012 is named as Allyson Brooke Hernandez. She is simply named as Ally Brooke. Currently, she is working on her debut solo studio album with Atlantic Records. She rose to prominence after she came as a member of the famous band Fifth Harmony. Their top singles include Worth It and Work from Home which also climbed at the top 10 in several national charts. Her band Fifth Harmony has won dozens of awards such as MTV Music Awards, People’s Choice Awards, Radio Disney Music Awards, Teen Choice Awards, and many more.

Ally Brooke performs her first solo show on stage on Day 2 of Fusion Festival 2018 at Otterspool Parade on Sept. 2, 2018, in Liverpool, England. She has a new Latin-pop bop called “Vámonos,” which she debuted live Sunday afternoon (Sept. 2) at Fusion Festival in Liverpool, U.K. Her performance to the upbeat, Spanish-language track was dance-heavy, with several backup dancers included in the choreography.

Being a part of the American girl group “Fifth Harmony”. The other members of the band are Normani Hamilton, Dinah Jane Hansen and Lauren Jauregui. Camila Cabello was also a band member but left the band in December 2016.

Ally Brook was born on 7th July 1993 in San Antonio, Texas, the U.S with the birth name of Allyson Brooke Hernandez. Her nationality is American-Mexican. She was born to Jerry Hernandez and Patricia Castillo, her parents. She was a six week premature baby, weighing in at 1 pound and 4 ounces when she was born. She is of Mexican descent and has an older brother named Brandon. Her zodiac sign is Cancer.

Talking about her education, she attended Cornerstone Christian Elementary School in San Antonio, Texas and completed her high school education through home-schooling.

Ally has got a sexy body. She has a tall height of 4 ft 11 inches and has a balanced weight of 45 kg. She has a pair of gorgeous dark brown eyes and lights brown hair. Her other body measurements include 33 inches bra, 25 inches waist, and 34 inches hip size. She maintained her body lot to keep herself fit.

Ally Brooke is an unmarried woman. In the year 2015, she started going out with Will Bracey. There was not any news regarding their break up or they are still continuing the relationship.

Previously, in the year 2012, she dated Drew Chadwick but it lasts only two months. After she breaks up with him, she began dating with Troy Ogletree in the year 2013 and the couple separated after two years.

Net Worth of Ally

Our contents are created by fans, if you have any problems of Ally Brooke Net Worth, Salary, Relationship Status, Married Date, Age, Height, Ethnicity, Nationality, Weight, mail us at [email protected]