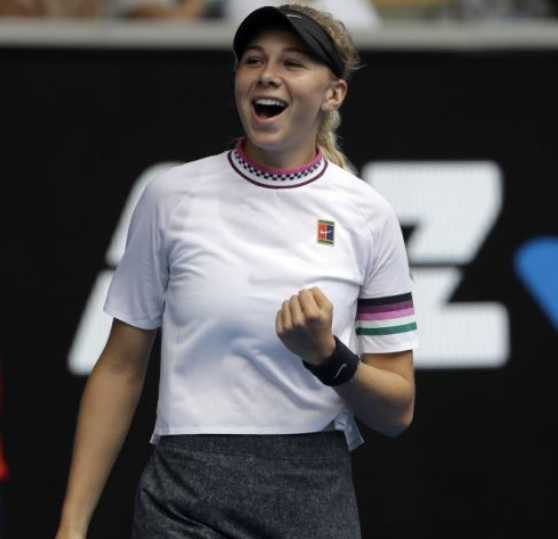 Amanda Anisimova is an American professional tennis player. She plays right-handed and two-handed backhand). She turned professional in 2016. She is the youngest player ranked in the top 100 by the Women’s Tennis Association (WTA). She reached the career-high ranking of No. 51 in the World. At the age of 17, she won her first WTA title, the Copa Colsanitas in April 2019. She has already won $694,813 prize money to date. She has over 117k followers on her Instagram.

what is Amanda Anisimova Famous For?

– The youngest player ranked in the top 100 by WTA.

Where was Amanda Anisimova Born?

Amanda Anisimova was born on 31 August 2001. She was born to a father, Konstantin Anisimov, and a mother, Olga Anisimova. Her birthplace is in Freehold Township, New Jersey in the United States. She holds an American nationality. Her zodiac sign is Virgo. Her parents immigrated from Russia to the United States before she was born. She has an older sister, Maria.

She started playing tennis at the age of 2. Her sister is also a tennis player. She credits her sister as her inspiration for taking up the sport.

Her family moved to Florida when she was very young. Her father coached her for a long time.

In 2016, she achieved a career-high ITF junior ranking of No. 2 in the world.

She won the high-level Grade A tournament at the age of 14.

She won the Grade 1 Copa del Cafe in 2016. She reached the final at the Grade A Copa Gerdau.

She became the first American finalist at the girls’ event since Ashley Harkleroad in 2002at junior Grand Slam tournament.

She won the Grade 1 Yucatan Cup and the Grade A Copa Gerdau at the age of 15.

She capped off her junior career by winning her first Grand Slam title at the US Open defeating fellow American Cori Gauff.

She was also a member of the United States team that won the 2017 Junior Fed Cup.

In 2016, she received a wild card into US Open qualifying. She defeated World No. 124 Veronica Cepede Royg.

She reached the final on the pro tour at ITF $25 event in Curitiba, Brazil.

She received a wild card into the Miami Open.

She won the USTA French Open Wild Card Challenge by reaching back-to-back finals at the ITF $80k event in Indian Harbour Beach and the ITF $60k event in Dothan during the clay-court season.

She made her Grand Slam debut at the French Open. She lost to Kurumi Nara. She became the youngest player since Alize Cornet in 2005 to participate in the main draw.

She won her first career professional title at the $60k event in Sacramento at the age of 15.

In 2018, she became the youngest player to reach the fourth round at the Indian Wells Open. She defeated Pauline Parmentier, Anastasia Pavlyuchenkova, and Petra Kvitova.

She also earned a wild card into Miami Open in 2018. She reached a career-high ranking of No. 128 in the world. She injured her right foot during the match against Wang Qiang at the Miami Open.

After recovery, she returned to tennis at the Silicon Valley Classic.

She reached the third round of the Cincinnati Open to return to the top 150.

She reached her first career WTA final defeating Zhang Shuai in the semifinals. She finished runner-up in the tournament losing to Hsieh Su-Wei. She reached the top 100 for the first time in her career.

She reached the quarterfinals at the Auckland Open in 2019.

She made it to the fourth round of the Australian Open in 2019.

She won her first WTA title at the Copa Colsanitas.

She reached the semifinal at the French Open in 2019. She was the youngest semifinalist at the event since Martina Hingis in 1997.

Who is Amanda Anisimova Dating?

Amanda Anisimova is reportedly single. She is focused on her professional tennis career. She is too young to be involved in a romantic relationship. It will be updated soon.

She lives in Aventura, Florida.

What are Amanda Anisimova Body Measurements?

What is Amanda Anisimova Net Worth?

Amanda Anisimova is a young and aspiring tennis player. She has already achieved success at an early age. She has won $694,831 prize money as of April 2019. She has a long career ahead of her. She will surely be earning a great fortune in the coming years.

Our contents are created by fans, if you have any problems of Amanda Anisimova Net Worth, Salary, Relationship Status, Married Date, Age, Height, Ethnicity, Nationality, Weight, mail us at [email protected]