Amanda Holden is an English multi-talented lady who is known as a popular television presenter, actress, singer, author, media personality and a talent competition judge. 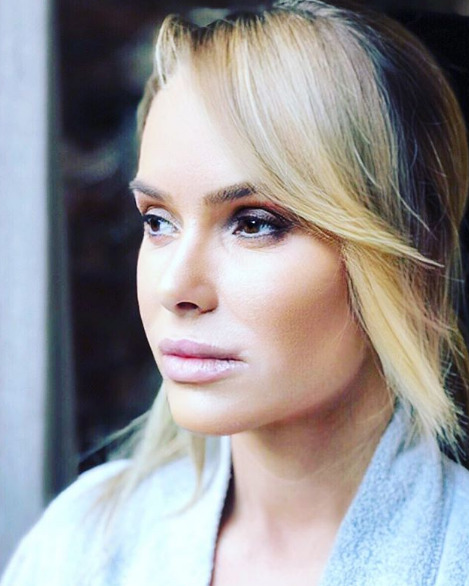 I never believed I wouldn't make it - and perhaps that's why I've always found work. I've always stuck at everything I've ever done. I absolutely won't give up.

I don't care who or what judges me, nothing's going to stop me from living my life how I choose.

I am an optimist. I think, as bad as life sometimes gets, there is so much joy and so much good stuff, that there is a balance.

Amanda Holden is an English multi-talented lady who is known as a popular television presenter, actress, singer, author, media personality and a talent competition judge. Holden holds her identity in Hollywood with her several hit movies and with her appearance as a judge on the TV talent show competition, “Britain’s Got Talent” since 2007. Holden is also a co-host of a radio network, “Hearty Breakfast” alongside Jamie Theakston.

What is Amanda Holden Famous for?

When and Where was Amanda Holden Born?

Amanda Holden was born on February 16, 1971, in Portsmouth, Hampshire, England. Her birth name is Amanda Louise Holden. Holden is a British with White ethnicity while Aquarius is her zodiac sign.

Amanda Holden is the daughter of Judith Mary Harrison(mother) and Frank Holden(father). Amanda was raised along with her younger sister, Debbie in Bishop’s Waltham though she was born in Portsmouth. Holden even had joined Bishop’s Waltham Little Theatre Company when she was 9.

Amanda studied at Swanmore Secondary School(Swanmore College) at Hampshire and then she moved to Bournemouth where she attended “Mountview Academy of Theatre Arts”. Amanda was once told by her teacher that she had a natural talent on stage.

Who is Amanda Holden Married to?

The beautiful actress, Amanda Holden has married twice throughout her entire life until date. Amanda was first married to Les Dennis, a comedian. The couple got married in June 1995 however, because of Holden’s affair with the actor, Neil Morrissey, the couple got separated in 2000 and divorced in 2003.

Later then Holden got married to her second husband, Chris Hughes on December 10, 2008, in a wedding ceremony held at Babington House, Somerset. The couple’s best man was Formula One driver, David Coulthard. Holden gave birth to their first child, daughter Alexa Louise Florence Hughes in 2006.

Later in 2011, she had her second child, son Theo Hughes but he was stillborn. She then gave birth to his third child, daughter Hollie Rose Hughes in 2012. Currently, Holden is living a great life with her loving husband and children in Surrey, England.

Amanda Holden has quite a great earning through her professional career as an actress, TV host and judge. Holden has managed to amass a great fortune of the amount in million dollars through her several movies, series and TV shows. Holden currently enjoys her fortune which is estimated to be around £4.5 million.

Holden is reportedly earning a salary of around £1 million for her presence as a judge on “Britain’s Got Talent”(BGT). Besides, she is also earning £1.5 million as a Heart Radio DJ. Holden has a £1 million record deal with Virgin EMI. Amanda Holden is reportedly the UK’s top-earning female TV star as in 2019.

With all the fortune in million euros, Holden has managed to live a lavish and luxurious lifestyle.

How Tall is Amanda Holden?

The 48 years old evergreen beauty, Amanda Holden has a well maintained perfect slim body physique. Holden is a gorgeous looking English lady who has a fair complexion with blonde hair and dark brown eyes. Holden stands tall with a height of 5ft. 4inches(1.63m) while her body weighs around 54kg(119 lbs).

Our contents are created by fans, if you have any problems of Amanda Holden Net Worth, Salary, Relationship Status, Married Date, Age, Height, Ethnicity, Nationality, Weight, mail us at [email protected]