Amber Heard is an American actress 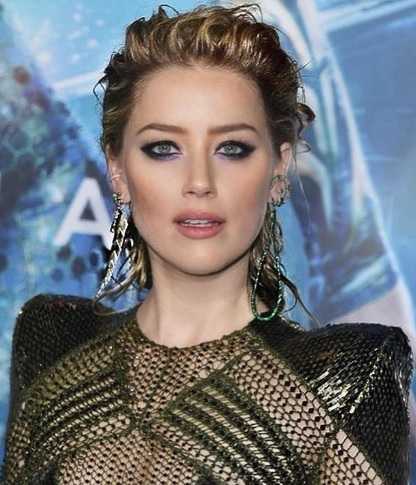 Amber Laura Heard, popularly known as Amber Heard is an American actress. She made her film debut in the 2004 sports drama, Friday Night Lights and appeared in small roles in few films. She rose to prominence after she played in Never Back Down and Pineapple Express. She won the Breakthrough Award at the Young Hollywood Awards in 2008.

Amber Heard revealed writing to The Washington Post that she lost significant roles after making abuse allegations against then-husband Johnny Depp. She wrote, “Friends and advisers told me I would never again work as an actress — that I would be black-listed. A movie I was attached to recast my role. I had just shot a two-year campaign as the face of a global fashion brand, and the company dropped me. Questions arose as to whether I would be able to keep my role of Mera in the movies ‘Justice League’ and ‘Aquaman”

She claimed a high-profile allegation to one of the prominent Hollywood actors backlashed her career. However, she did not once mention Depp by name in the entire article. However, Depp has repeatedly denied the allegations.

She also claimed she received death threats after she came forward against the abuse.

Heard filed for divorce within less than two years of their marriage making verbal and physical abuse allegations throughout their married life to the Pirates of Caribbean star. Images of her injuries supporting her abuse claim were also published. Heard even obtained a temporary restraining order against him. Their divorce was finalized in January 2017 for a settlement of $7 million.

What is Amber Heard famous for?

Who are Amber Heard parents?

Amber Heard was born on 22 April 1986. Her birth name is Amber Laura Heard. She was born to David Heard and Paige Parsons in Austin, Texas in the United States. She holds an American nationality. She has a sister name, Whitney Heard. She attended St. Michael’s Catholic Academy and dropped out of high school and earned a diploma through a home-study course. She is an atheist. Her zodiac sign is Taurus.

What does Amber Heard do?

Initially, she worked in two music videos, “There Goes My Life” and “I Wasn’t Prepared”.

In 2004, she also appeared in small supporting roles in The WB’s short-lived series, Jack & Bobby.

In 2005, she guest-starred as a salesgirl in the teen drama series, The O.C.

In 2004, she made her film debut in the sports drama Friday Night Lights.

She then appeared in small supporting roles in several feature films including Drop Dead Sexy, Price to Pay, You are Here, and Alpha Dog.

She also appeared in an episode of the police procedural Criminal Minds, Day 73 with Sarah, and Californication.

She then appeared in Side FX, North Country, and Remember the Daze.

In 2008, she earned recognition after she appeared in supporting roles in the stoner comedy Pineapple Express.

She further earned mainstream recognition after she appeared in the martial arts drama Never Back Down.

In 2008, she won a Breakthrough Award at the Hollywood Film Festival.

She later appeared in The Informers, All the Boys Love Mandy Lane, The Stepfather, ExTerminators, Zombieland, The Joneses, The River Why, The Ward, And Soon the Darkness.

In 2011, she appeared as the female lead role opposite Johnny Depp in The Rum Diary, and Drive Angry.

In 2013, she appeared in the Paranoia, Machete Kills, and Syrup.

She has appeared in other films such as  3 Days to Kill, The Adderall Diaries, One More Time, Magic Mike XXL, The Danish Girl, I Do… Until I Don’t, Her Smell, and London Fields.

She played the role of Mera as the Aquaman’s Atlantean queen in the DC Comics superhero film Justice league in 2017.

She reprised the role in the 2018 film, Aquaman.

Amber Heard dated a photographer, Tasya van Ree from 2008 to 2012. She met actor Johnny Depp while filming The Rum Diary in 2011. They began living together in 2012. They got married in a private ceremony at their home in Los Angeles on 3 February 2015.

Heard filed for divorce from Depp in May 2016. She obtained a restraining order against him five days later stating that he had been “verbally and physically abusive” throughout their relationship with the latest incident of violence having taken place only two days before she filed for divorce. Their divorce was finalized in January 2017 and she received $7 million as a settlement.

She then dated Elon Musk for about a year. They separated in August 2017.

How much is Amber Heard worth?

Our contents are created by fans, if you have any problems of Amber Heard Net Worth, Salary, Relationship Status, Married Date, Age, Height, Ethnicity, Nationality, Weight, mail us at [email protected]