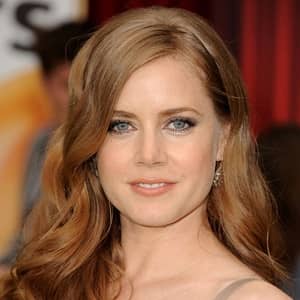 It's nerve-wracking! I'll be up there, singing the song in front of billions of people - oh, and Daniel Day-Lewis! And Cate Blanchett. I'll be going to Taco Bell when the ceremony is over. Mexican food cures me.

I was a hostess at Hooters, and that was sort of fun. I was 17, and then when I was 18, I waited [tables] for about a month. I wasn't cut out to be a waitress, and I certainly wasn't cut out to be a Hooters waitress. That was a short-lived ambition. Everyone would agree, if they could see me, Hooters isn't necessarily the best way to describe me.

I'm like the luckiest girl in the world. I've gotten to be a princess, I've gotten to work with the Muppets. A lot of my childhood dreams about who I wanted to be when I was a grown-up, I at least get to play them in movies. And Lois Lane is one of them. So I'm just excited. I hope I bring something that people enjoy.

Amy Adams; real name Amy Lou Adams is an eminent American actress and well known for her Academy Award-nominated roles in several films, including American Hustle, Junebug, Doubt, The Fighter, and The Master.

Where is Amy Adams from?

Amy Adams was born on August 20, 1974, in Vicenza, Veneto, Italy. She holds an American nationality and mixed (English- Irish-Scottish- Welsh) ethnicity, and is currently 45 years old. Her father is Richard Kent Adams, who is a U.S. Army veteran and mother, Kathryn Hicken. Whereas, her parents divorced in 1985. After that, she grew up in The Church of Jesus Christ of Latter-day Saints. Similarly, she spent her childhood and raised in Castle Rock, Colorado, the USA.

She attended Douglas County High School, located in Colorado. There she worked as a greeter at a Gap store while performing in Community Theater.

How did Amy Adams rise to stardom?

Adams began her career as a dancer at Boulder’s Dinner Theatre in the mid-1990s. In addition, she also worked at Country Dinner Playhouse and Heritage Square Music Hall. Then, she was spotted by a Minneapolis dinner-theater director, Michael Brindisi in the year 1995.

Similarly, she made her acting debut in the satirical 1999 comedy film Drop Dead Gorgeous. After that, she was also cast in Fox Network’s television series spin-off of Cruel Intentions. In the series, she also played the role of Kathryn Merteuil.

Whereas, from 2000 to 2002, Adams appeared in a series like Psycho Beach Party, That ’70s Show, Charmed, Buffy the Vampire Slayer, Smallville, and The West Wing. In the year 2002, she appeared in the hit biopic movie Catch Me If You Can.

Moreover, her breakthrough role came in the 2005 film Junebug. Likewise, in 2018, she received her first producer credit when she became the executive producer of HBO’s Sharp Objects. In addition, Adams is a singer. She also appeared in the 2011 version of The Muppets movie and recorded seven songs for the soundtrack.

What is Amy Adams’s Net Worth?

Amy has an estimated net worth of around $60 million dollars. Additionally, she was also listed as one of the highest-paid actresses in the world. In addition, her net worth is enough for her to maintain a standard living in a luxurious way.

Besides this, Adams will earn roughly $300,000 per episode for her role on HBO’s new series ‘Sharp Objects.’ Her movies have done well at the box office. Her highest-grossing films include Batman Vs. Superman: Dawn of Justice, Justice League, Man of Steel, and Night at the Museum: Battle at the Smithsonian.

Likewise, her second-highest grossing film so far, Justice League, had total domestic gross earnings of more than $229 million and gross worldwide earnings of more than $657 million. In the year 2017, Forbes listed her as one of the world’s highest-paid actresses. That year, she earned roughly $13.5 million.

In the year 2019, Adams is set to appear in the films The Woman in the Window and The True American. However, there is no information about her car and house.

Furthermore, she also played reporter Lois Lane in the 2013 superhero film Man of Steel. For her role in American Hustle, she won a Golden Globe Award.

Similarly, she also won Golden Globe Award for portraying artist Margaret Keane in the comedy-drama Big Eyes (2014). In the year 2016, Adams reprised the role of Lois in Batman v Superman: Dawn of Justice. Time Magazine named her one of the 100 most influential people in the year 2014.

There was a controversy when she did a nude scene. She is already successful in her career so she did not have to do that scene.

How tall is Amy Adams?

She has a height of 5 feet 4 inches and weighs is 58Kg. Her body measurement is 34-25-34 inches. Similarly, she has Strawberry blonde hair and blue eyes.

Amy Adams married an American actor and artist Darren Le Gallo. Actually, the couple first met in an acting class. Furthermore, the duo engaged in April 2008. They had a daughter together named Aviana Olea Le Gallo on May 15, 2010.

Later on, the couple got married on May 2, 2015, in California. Moreover, Amy and Darren have been married for four years now and their relationship is going very well.

Our contents are created by fans, if you have any problems of Amy Adams Net Worth, Salary, Relationship Status, Married Date, Age, Height, Ethnicity, Nationality, Weight, mail us at [email protected]