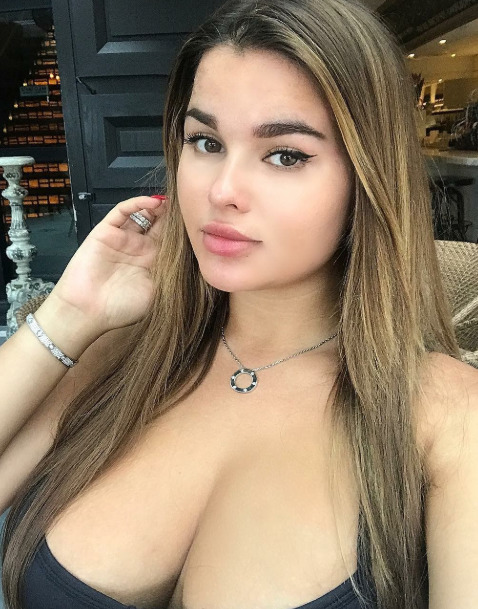 Anastasia Kvitko is a famous Russian glamour model as well as an entrepreneur who is famous for her 38-25-42 figure and for her gorgeous voluptuous shaped figure. Her figure is completely natural and down to a strict diet and exercise regime. She is famous for the immense popularity of her Instagram account, on which she has more than 11 million followers. She also has a YouTube channel around 2k subscribers. She is also nicknamed as Stacy, Russian Kim Kardashian. In the year 2016, she made her first TV show appearance on the talk show, “Un Nuevo Dia”. In the year January 2017, she was placed on the 3rd spot behind Natalia Ionova and Vera Brezhneva (1st spot) in the online poll conducted by Maxim magazine to find Russia’s most beautiful woman. She is often accused by online trolls of having undergone multiple surgeries to attain her curvaceous figure. She has claimed that she has only got one surgery is done, which was to remove her appendix. Currently, she resides in Los Angeles, California, USA. She frequently flaunts on the site in a series of skimpy outfits and swimsuits. She has also launched her own line of swimsuits named ‘AC-350,’ which was unveiled at the ‘New York Fashion Week.’ She has appeared as a guest in MTV “Wild’N Out”. She is currently a supermodel and charges hefty amounts for photo-shoots. She also has a pet dog in her house. She is a major promoter of the brand Fashion Nova.

What is the Birthplace of Anastasia Kvitko?

Born on 25th November 1994, Anastasia Kvitko’s birthplace is in Kaliningrad, Russia. She was born and raised in western Russia in the Kaliningrad Oblast region and moved to the United States in her late teen years. She holds Russian nationality and her ethnicity is Russian-White. Her race is White. The father of Anastasia is a businessman while his mother is a primary school teacher. She grew up with a sister. Apart from this information, she hasn’t revealed her family background. As of 2019, she celebrated her 25th birthday. Her religion is Catholic and she is Sagittarius by Zodiac sign. While growing up, she was a very sporty girl and used to participate in a number of light athletic events and courses back home in Russia.

Anastasia Kvitko is a very successful model and she has reached a great height in her career. Her work on the modeling industry has helped her pursue a lavish lifestyle. She has garnered a considerable amount of net worth from her profession. Anastasia Kvitko has a net worth of $2 Million dollars as of 2020. Without a doubt, she is earning a considerable amount of salary from her work. Her source of earning is from a modeling career. She has done endorsement work for the American swimwear brand, Eliya Cioccolato. Also, she has used her immensely popular social media accounts to give exposure to various products and brands such as Fashion Nova and The Toy Store Mia (Luxury Car Rental Company in Miami).

Who is Anastasia Kvitko Dating (Boyfriend)?

Regarding her personal life, Anastasia Kvitko is an unmarried woman. At present, she is not single but she is in a relationship. The Instagram model Kvitko is having a relationship with the Russian millionaire Arseny Sharov. She first met Arseny in Los Angeles who is a renowned businessman. According to the source they started to date each other a year ago. In addition, they seem to remain quiet about their relationship in public, therefore it’s hard to give more details about their affairs. The paparazzi spotted them at a hotel where they were spending quality time together. The duo is enjoying their life a lot at present. Her sexual orientation is straight.

Previously, she used to have a relationship with the famous Russian rapper Timati. Timati and Anastasia had an affair when they used to live in Moscow. Later the duo broke up. However, it’s hard to figure out why these couples split.

How tall is Anastasia Kvitko?

Anastasia Kvitko is a very hot and sexy lady with a charming personality. She has got a tall height of 5 ft 9 in or 1.75 m with a bodyweight of 57 Kg. She has got a sexy body figure of 41-27-41 in or 104-68.5-104 cm. Her dress size is 12 US and her bra size is 36DD. Her shoe size is 9 US. She has claimed in her interviews that she works hard in the gym to maintain her curvaceous figure. In fact, she starts her day by hitting the gym and has even hired a personal trainer to get the most out of her workout. Overall, she works out in the gym for about 4 times a week and due to obvious reasons, pays special attention to her midsection and lower body. However, she is not a fan of lifting heavyweight and going too hard in the gym as it isn’t perfect for a feminine body.

Our contents are created by fans, if you have any problems of Anastasia Kvitko Net Worth, Salary, Relationship Status, Married Date, Age, Height, Ethnicity, Nationality, Weight, mail us at [email protected]