Andrew Yang is an American entrepreneur best known as the founder of Venture for America. 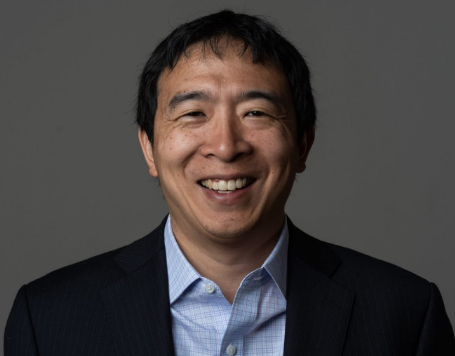 In most every business, you learn by doing. The apprenticeship model is much more effective than the classroom for cultivating entrepreneurs

Overnight successes are generally years in the making. And most progress is made in isolation, far from the public eye

Andrew Yang is an American entrepreneur best known as the founder of Venture for America. He is also the U.S 2020 Democratic presidential candidate. He worked in startups and early-stage growth companies as a founder or executive from 2000 to 2009. After he founded VFA, the Obama administration selected him in 2012 as a “Champion of Change” and in 2015 as a “Presidential Ambassador for Global Entrepreneurship”.

What is Andrew Yang’s claim to fame?

Entrepreneur, philanthropist, and founder of Venture for America (VFA), as well as a Democratic presidential candidate in the United States in 2020.

In his 2020 campaign, Andrew Yang promotes his proposal for Universal Basic Income (UBI).

Andrew Yang, a Democratic presidential candidate from Schenectady, New York, has made universal basic income a centerpiece of his campaign. On Sunday, the 44-year-old businessman told ABC’s This Week that his proposal to give $12,000 a year to every American adult will be financed by a value-added tax. Yang used Alaska as an example, mentioning that everyone in the state receives between $1,000 and $2,000 each year from oil revenues. Yang believes that the United States, like any other industrialized economy, should impose a value-added tax on large technology firms like Amazon and others. Yang, a political outsider, claims that his poll numbers are increasing as more people learn about his “trickle up” economic message. Yang has worked as a tech executive, an entrepreneur, an investor in start-ups, a corporate attorney, and more, but has never held public office.

Andrew Yang is from what state?

Back in his early years, Yang was born in Schenectady, New York, to Taiwanese immigrant parents. His father worked in IBM and GE research laboratories, and his mother received a master’s degree in statistics before going on to become an artist.

Andrew graduated from Phillips Exeter Academy in 1992. After that, he went to Brown University and earned a Bachelor of Arts in Economics. He also received his Juris Doctorate from Columbia Law School.

Andrew Yang is a member of which political party?

He started working as a corporate attorney at Davis Polk & Wardwell in New York after finishing his studies. He then became Vice President of MMF Systems Inc., a healthcare tech startup. He left MMF systems after several years in the healthcare industry and later formed Venture for America, a charitable fellowship program.

Venture for America (VFA) was created in 2011 with the goal of mobilizing the next generation of entrepreneurs and equipping them with the skills they need to build jobs in American cities.

Yang announced his intention to run for President of the United States in 2020 on November 6, 2017. He came up with the concept of giving all US people over the age of 18 $1000 a month. His campaign slogan is “Humanity First,” a reference to his conviction that technology is destroying many main sectors and is one of the most serious threats to the workforce.

Yang declared on March 11, 2019, that he had fulfilled the criteria for inclusion in the first round of debates for candidates in the Democratic presidential primary election by collecting contributions from 65,000 donors in at least 20 U.S. states.

Who is Andrew Yang’s wife?

Reflecting on his personal life, Yang was a married man. He was married to Evelyn. Together they blessed two sons. We have not information about how to they met and when they exchange their vows. If you have, please share with us by using comments. As of now, they live a blissful life with their children in New York City.

What is Andrew Yang’s net worth?

While his financial details are not available publicly, various websites report his net worth to be in the range of $1.5 million to $2 million. He probably earns a decent amount of money from his profession which shows his present lifestyle. If you have more information about his income details, please share with us by using comments.

How tall is Andrew Yang?

Observing his body Statistics, he stands to be 5 feet 7 inches or 170 cm tall. He weighs around 70 kg or 154 pounds. His other body information was not disclosed yet. In the case of disclosure, we will let you know.

Our contents are created by fans, if you have any problems of Andrew Yang Net Worth, Salary, Relationship Status, Married Date, Age, Height, Ethnicity, Nationality, Weight, mail us at [email protected]

Kim Kardashian is not on speaking terms with her ex-husband, Ye West after his candid sit down interview!
Tags : #American entrepreneur