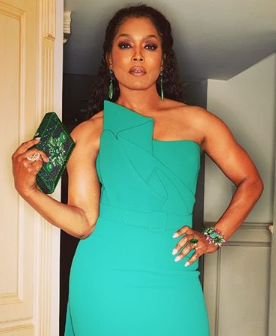 Angela Bassett is an American actress, who is most known for her roles in biographical productions like What’s Love Got to Do with It and The Rosa Parks Story. She has worked on a large variety of projects in her illustrious career spanning over three decades.

Before getting into acting, she briefly served as a receptionist at a beauty salon and worked as a photo researcher at the U.S. News & World Report magazine. However, she proved her acting prowess as a theater actor and went on to feature in several movies and television shows. Let’s know more about her through this article.

What is Angela Bassett famous for?

Where is Angela Bassett From?

Recalling her early life, Angela was born in New York City, New York. She was born to her parents; Betty Jane and Daniel Benjamin Bassett in the year 1958 as Angela Evelyn Bassett. She also has a younger sister D’nette. She is Afro-American ethnicity and she is of American nationality. After the separation of her parents, her mother took both of the children to live with her grandmother in St. Petersburg, Florida.

Where is Angela Bassett educated?

Concerning her education, Angela studied at Boca Ciega High School and attended Yale University where she received her bachelor’s degree in African-American studies. She earned a Master of Fine Arts degree from the Yale School of Drama.

When did Angela Bassett pursue her acting career?

Who is Angela Bassett married to?

Reflecting on her personal life, Angela is married to an American actor Courtney B. Vance. the couple got married on 12th October 1997 after being in a romantic relationship for a year. The couple has been blessed with twins; daughter, Bronwyn Golden Vance, and son, Slater Josiah Vance.

Previously, she was also in a romantic with Mark Jenkins. There is no information about her being in other romantic relationships that we know of.

How Much is Angela Bassett worth?

Being an actress by profession, Angela earns a decent amount of money and fame through her profession in the field of the entertainment industry.  Based on some online sites, her estimated net worth said to be $20 million at present. However, her salary and assets details are yet to be disclosed.

How tall is Angela Bassett?

Observing her body physics, Angela stands a height of 5 feet 4 inches and weighs around 52 Kg. Similarly, she has a pair of hazel eyes and dark brown hair color. She used 34B bra size and 4 (US) dress sizes. Further, her body measures 34-25-37 inches and she has a slim body.

Our contents are created by fans, if you have any problems of Angela Bassett Net Worth, Salary, Relationship Status, Married Date, Age, Height, Ethnicity, Nationality, Weight, mail us at [email protected]