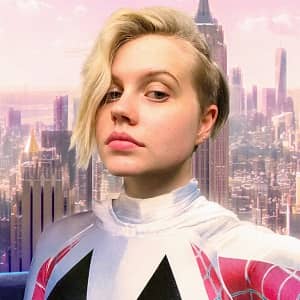 Angourie Rice is an Australian actress. She is famous for her roles in ‘These Final Hours’, ‘Walking with Dinosaurs’, ‘Nowhere Boys: The Book of Shadows’, and ‘The Nice Guys.’

Angourie Rice was born in Perth, Australia, on January 1, 2001. As of 2021, her age is 20. She was born to parents Jeremy Rice (father) and Kate Rice (mother). Both of her parents are from the film industry. Her father is a director whereas her mother is an actress. Seeing both of her parents’ work from an early age, she always wanted to be an actress when she grew up.

She is her parents’ eldest daughter and has a younger sister named Kalliope who is also an actress and gymnast.

How did Angourie Rice become so famous? The Nice Guys, Spiderman

Angourie Rice made her feature film debut in 2013 with the apocalyptic thriller movie, ‘These Final Hours’. Moreover, she also made appearances in ‘Worst Year of My Life Again’, and ‘Mako: Island of Secrets’ in the following years.

It was in 2016’s action comedy movie, ‘The Nice Guys’ in which she really got her breakthrough. She portrayed Holly March opposite Ryan Gosling and Russell Crowe in the movie. Moreover, she also made appearances in ‘Nowhere Boys: The Book of Shadows’ in which she portrayed Tegan.

She portrayed Eliza Wishart in the 2017 Australian film adaptation ‘Jasper Jones’ which earned several AACTA nominations. The same year, she portrayed Betty Brant in ‘Spider-Man: Homecoming’, a role she reprised in its sequel ‘Spider-Man: Far From Home’ starring alongside Zendaya and Tom Holland.

In 2018, she was the lead in the romantic drama ‘Every Day’ and ‘Ladies in Black’. In 2019, she starred in the Season 5 finale of ‘Black Mirror’. She is set to star as ‘Siobhan Sheehan’ in the upcoming HBO mini-series, ‘Mare of Easttown’.

What is the Net Worth of Angourie Rice?

As of 2021, she has an estimated net worth of around $2 million. According to sources, she earns around $15k-$20k per episode of TV series and banks even more for her roles in movies. So far, the young actress has done a good job in her career.

Currently, Angourie Rice seems to be single and not dating anyone. She seems more focused on her career rather than involving in a relationship. Rice has been private regarding her personal life and seems to be intending to stay that way. She has not revealed anything about having her past affairs or boyfriends. There is a chance that she might be dating someone and not revealing it to the public. But as of now, we have to assume that she is single.

Rice stands at a height of 5 feet 3 inches and weighs around 53 kg. She has blonde hair and a pair of beautiful blue eyes.

Our contents are created by fans, if you have any problems of Angourie Rice Net Worth, Salary, Relationship Status, Married Date, Age, Height, Ethnicity, Nationality, Weight, mail us at [email protected]