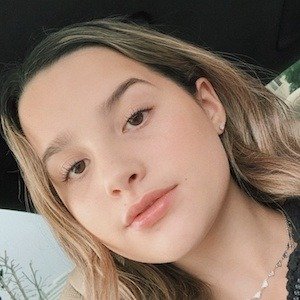 Annie LeBlanc is a beautiful American YouTuber, actress, singer, and former gymnast. She earned her fame after posting several videos on the famous video-sharing app TikTok. She made her appearance in YouTube videos since the early age of 4. Her videos mostly consist of gymnastics meet and tutorials.

How old is Annie LeBlanc?

The full name of Annie LeBlanc is Julianna Grace “Annie” LeBlanc. She was born on December 5, 2004, in Augusta, Georgia, USA. As of 2020, her age is 15. She is American by nationality and her zodiac sign is Sagittarius. About her family and personal life, her father‘s name is Billy LeBlanc who has served in the US Navy. Her mother‘s name is Katie LeBlanc.

Annie has a younger sister named Hayley whom she loves her very much. Hayley is a gymnast on her own and is very famous on Instagram. Annie had an older brother as well. The older brother Caleb passed away because of rare inborn heart disease which he suffered from 2015. Caleb had a gaming YouTube channel, where he used to post gameplay videos.

Moving on towards her education., Annie and Hayley, both quit gymnastics and are homeschooled.

During her early days, Annie started her career by performing gymnastics videos and tutorials. In 2017, she did a collaboration with her boyfriend Hayden Summerall. The collaboration video was a cover of “Little Do You Know” and sooner the video went viral overnight. In November 2017, after the cover video went viral, LeBlanc came up with her own original single “Ordinary Girl”.

Later in August 2017, LeBlanc was introduced as a co-host of the series We Are Savy, which debuted with over 4.2M+ views in its pilot episode and focuses on music, fashion, and lifestyle elements. Following the August, she starred in the YouTube Brat show A Girl Named Jo playing the part of Jo Chambers, and also played Rhyme in Chicken Girls: The Movie. After that, LeBlanc and Addison Riecke were starred in a Brat teen series “A Girl Named Jo” in 2018.

After such a remarkable performance in several shows, she received the shorty award for “Muser of the year” in the year 2018.

What is the net worth of Annie LeBlanc?

Annie has achieved such fame at such a young stage of her life. She has won over 4 million subscribers on her YouTube recently. So it won’t be a surprise to hear about her earnings. She has a net worth of about $1 million. However, she has hidden her earnings from the media.

Is Annie Leblanc in a relationship?

During the past, Annie’s name was linked up with Hayden Summerall. Fans were very happy about their relationship and even gave the name Hannie. Until Annie ended the relationship when she realized that something might have been going on between Hayden and Kenzie Ziegler.

Annie is currently in a relationship with Asher Angel. Annie and Angel first met during Asher’s photoshoot for the video of his song Chemistry. The couple initially became friends and gradually turned into a relationship. Annie and Asher confirmed their relationship when Asher shared an adorable photo of the couple on Valentine’s Day in 2019.

How tall is Annie LeBlanc?

Annie stands tall at a decent height of 5 feet 4 inches and she weighs about 46 kilograms. She wears a bra size of 30B and a shoe size of 6 (UK). Similarly, her body measures at 32-23-33 inches. Her hair is blonde and her eyes are dark brown.

Her official TikTok profile (@annieleblanc) has garnered 15.8 million followers family and her YouTube channel has accumulated about 3.93 million subscribers to date.

Our contents are created by fans, if you have any problems of Annie LeBlanc Net Worth, Salary, Relationship Status, Married Date, Age, Height, Ethnicity, Nationality, Weight, mail us at [email protected]