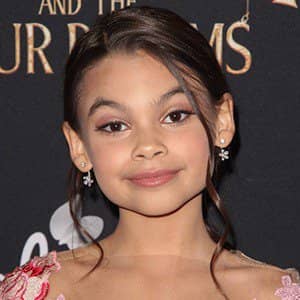 Ariana Greenblantt is a child movie actress from America. She is well famous for her role as Daphne Diaz on the hit series Stuck in the Middle and asyoung Gamora in the Avengers: Infinity War. The star is a talented actress and dancer as well; she has the perfect blend of cuteness and intelligence.

When was Ariana Greenblantt born?

Ariana Greenblatt was born on 27 August 2007 in NewYork, USA. She is currently 13 years old and belongs to the birth sign, Virgo. Ariana is of Hispanic descent. Talking about the star’s personal life, there is nothing much known about her parents, but she lives with them and they travel a lot with her.

She grew up with an elder brother Gavin who is 12-years-old. She mentions  loving her brother very much and the two hardly fight, they are more like “buddies”. Ariana likes volunteering for foundations including children hospitals where she tries to cheer children who are suffering from fatal ailments. Currently, we dont have much about her education history, however, she seems to be attending her schooling.

How did Ariana Greenblantt rise to stardom?

It was at such a tender age, Ariana Greenblantt identified her own talent. As we all know, she is an excellent dancer, and even used to participate in local dance competitions/shows. It was the year 2015 when all of a sudden she landed a role on ‘Liv and Maddie’ which was her debut on American Television.

Soon after she played the role, she starred in the episode ‘Joy-A-Rooney.’After gaining a couple of recognitions, she landed a main role in the Disney’s comedy series ‘Stuck in the Middle’ in 2016. The young girl is a big fan of Disney Movies and she just loves attending premiers. It was not later until she got her official ID ‘Wand’ from Disney Channel.

Additionally, she appeared in the Marvel movie Avengers: Infinity War where she played the young version of Gamora in 2018. Before the hit, she starred in the film named A Bad Moms Christmas (2017). Looking at the update of the actress, Ariana is ready to make a big splash in 2020 as five movies of the young star are ready to be launched next year.

Disney is soon going to launch its live-action animated adventure movie ‘The One and Only Ivan’ in August 2020 where she will be playing a prominent role in the movie.

How much is Ariana Greenblatt’s Net Worth?

It is no sursprise that the young talent has worked in more than a few television series and films. Her amazing ability to understand and adapt to character is what makes her so special when it comes to discussing her acting skills. According to the latest media sources, Greenblatt holds an estimated net worth of $30,000. However, there is no record on her official earning working as a professional actress.

How tall is Ariana Greenblantt?

There is nothing much information on the star’s body measurements. However, she stands tall with a decent height of 4 Feet 1 Inch, and she weighs about 35 kilograms. Her appearance features her cute looks with her brown eyes and dark brown hair.

Is Ariana Greenblantt dating anybody?

As a 13 year old girl, Ariana is too young to fall in love with any male celebrity. She seems more focused on her career goals before getting into dating lifestyle. However, the girl has a vibrant smile in her face, which adds more to her attractiveness. Thus, it wont be long enough to see her name linked up to other stars romantically. Currently, the young girl is single.

Talking about the star’s social media status, the girl is quite active on her social media accounts. She has about 1.4 million followers on Instagram and about 2.7 k followers on her official Facebook profile. However, she isn’t active on other media sites such as YouTube and Twitter. She holds an account on Tik Tok with about 2k followers which is handeled by her mother.

Our contents are created by fans, if you have any problems of Ariana Greenblantt Net Worth, Salary, Relationship Status, Married Date, Age, Height, Ethnicity, Nationality, Weight, mail us at [email protected]