Ariel Winter is an American actress and voice actress. 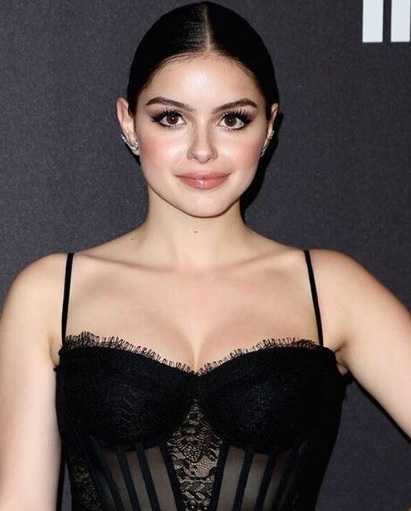 Ariel Winter Workman, popular by the name Ariel Winter is an American actress and voice actress. She rose to prominence after she starred as Alex Dunphy in the comedy series Modern Family. She is also known for her voice role of the title character in the Disney Junior show, Sofia the First and the voice of Penny Peterson in the 2014 animated film, Mr. Peabody and Sherman. Winter and her Modern Family castmates have won four Screen Actors Guild Awards for Best Ensemble in a Comedy Series from 2010 to 2014. She has also won Young Artist Outstanding Young Ensemble in a TV Series Award for her work in Modern Family.

She has garnered over 3.9 million followers on her Instagram.

The birthday girl, Ariel Winter, who just turned 21 on 28 January 2019, has slammed those body shamers who criticized or trolled her for undergoing plastic surgery saying that she did not undertake plastic surgery.

She received a lot of criticism and troll comments on her Instagram post, where she wore a plaid jumpsuit and posed with actor Joe Kaprielian.

Replying to one of the comments, she fired back, “I appreciate you wanting to help girls love themselves the way they are, but you are also kind of cutting someone (me) down. I also didn’t get plastic surgery. That is also not being supportive of women if you’re just assuming something about the way they look”.

Ariel Winter was born on 28 January 1998. Her birth name is Ariel Winter Workman. She was born to a father, Glenn Workman, and a mother, Chrisoula “Crystal” Workman. She is of Greek, English descent. She belongs to white ethnicity. Her birthplace is in Los Angeles, California in the United States. She holds American nationality. Her zodiac sign is Aquarius. She follows Christianity and attends the Greek Orthodox Church. She has two siblings, a brother, Jimmy Workman, and a sister, Shanelle Workman.

She was homeschooled. Later, she attended a private school after being emotionally and physically abused by her mother. She then attended the University of California in 2017.

She was introduced in the entertainment industry in 2002, where she worked in a Cool Whip commercial advertisement.

She made her television debut in an episode of Listen Up! in 2005.

She landed one of the main roles in the comedy series, Modern Family in 2009.

She earned wide recognition for her role as Alex Dunphy in the Modern Family. She, along with her other cast members have won four Screen Actors Guild Awards for Best Ensemble in a Comedy Series from 2010 to 2014.

She has also appeared in minor roles in Minnie’s Bow-Toons, R.L. Stine’s The Haunting Hour: The Series, and Milo Murphy’s Law.

She has voiced Marina the Mermaid in the 15 episodes of Jake and the Never Land Pirates.

She made her film debut in the 2005 film, Kiss Kiss Bang Bang.

She has appeared as Young Trixie in Speed Racer, Suzie in Life Is Hot in Cracktown, Sarah Barnett in Duress, Carla Benson in Opposite Day, Sadie in Killers, Lisa in Nic & Tristan Go Mega Dega, Sally in The Chaperone, Talia in Fred 2: Night of the Living Fred, Grace in Excision, Dora in Dora the Explorer and the Destiny Medallion, Kate in Safelight, and Lil in The Last Movie Star.

She has earned recognition as a voice actress in the films.

Her sister, Shanelle Workman filed to become her guardian in October 2012. The court granted Shanelle guardianship in May 2014. On 15 May 2015, Winter declared via Twitter that she was officially emancipated.

The Modern Family star stands at a height of 1.55 m i.e. 5 feet and one inch. She has a bodyweight of 134 lbs i.e. 61 kg. She wears a bra of size 34D. She underwent breast reduction surgery in 2015. She has a voluptuous body build. Her body measurements are 38-28-34 inches. She wears a dress of size 12 (US). She has dark brown eyes and her hair color is black. She usually dyes her hair dark brown.

The Modern Family star has an estimated net worth of $12 million. She rose to prominence after she starred as Alex Dunphy in Modern Family. She has voiced over several television series and films. She has earned her fortune working in the entertainment industry.

Our contents are created by fans, if you have any problems of Ariel Winter Net Worth, Salary, Relationship Status, Married Date, Age, Height, Ethnicity, Nationality, Weight, mail us at [email protected]