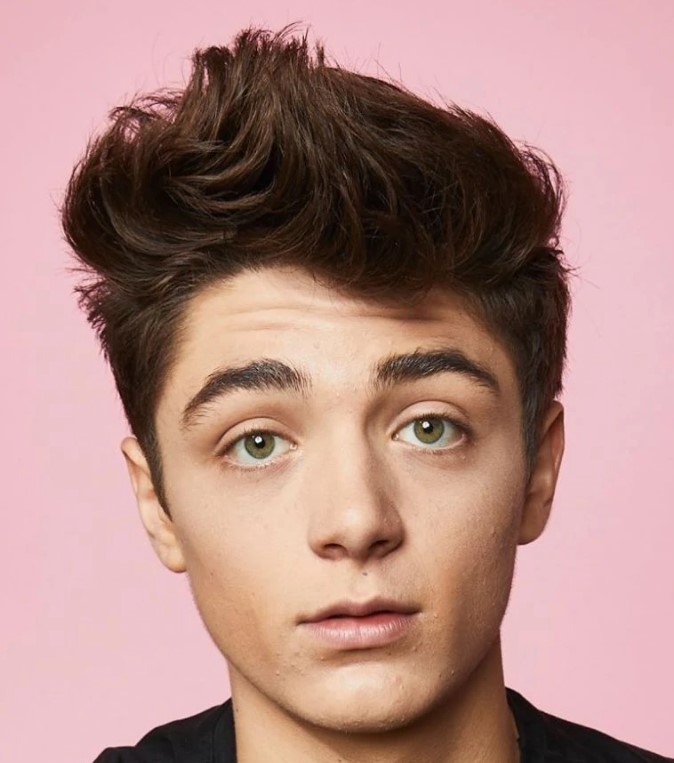 Asher Angel is an American actor who is well-known for his role as Jonah Beck in the 2017 Disney Channel series, “Andi Mack”. Angel was only 15 years old when he starred on the series rising much popularity and gained many fandoms even in his teens for which he even won a Young Entertainer Award. Born and raised in Paradise Valley, Arizona, Angel began his acting career as a child at age of 5 in the 2008 flick, “Jolene”.

Angel is actually a multi-talented teenager who is also a great singer and a guitarist too and with his passion for acting, Angel certainly is one of the most talented young and upcoming artistes in Hollywood. In September 2020, Angel won his first-ever “iHeartRadio Music Awards” in the category of “Social Star Award” which he shared on his Instagram: @asherangel which has over 5 million followers.

What is Asher Angel Famous for?

Where was Asher Angel born?

Asher Angel was born on September 6, 2002, in Phoenix, Arizona, United States. His birth name is Asher Dov Angel. His nationality is American. Angel belongs to White ethnicity while Virgo is his zodiac sign.

Asher was born as the eldest of the 3 children to his parents: Jody Angel(father) and Coco Angel(mother). On his mother’s side, he is the grandson of Dennis Yares and great-grandson of Riva Yares, both prominent in the Scottsdale art world. He grew up in Paradise Valley along with his two younger siblings, a brother, Avi, and sister, London Bleu Angel. His brother named Avi is also an actor and fashion model.

Asher always had an interest in acting since his childhood that he started his career at a tender age of 5 and has risen up as one of the brilliant younger actors in Hollywood with his fascinating acting skills. He also loved singing and playing the guitar. Even though he has achieved much popularity and success at a very young age, his father has been reminding him not to lose focus from education for his better future success.

Who is Asher Angel’s Girlfriend?

Asher Angel was previously in a relationship with his beautiful ex-girlfriend, Annie LeBlanc. Asher and Annie met during the video shoot for his song, “Chemistry” back in 2018. Initially, Annie had invited Asher to appear in one of her videos, but he couldn’t because he was busy filming, “SHAZAM!” but later he invited Annie to appear on his song.

The two became friends the instant they met and got pretty close in the following months that she even attended Asher’s 16th birthday party in Los Angeles. They even shared an intimated Valentine’s Day post in 2019, that created many speculations of the couple. Later, Asher himself admitted and confirmed of being in a relationship with Annie and even shared that Annie was the inspiration behind his hit song, “One Thought Away” which he wrote for his then-girlfriend.

However, after almost 2 years of dating, the couple took to Instagram about their break up as Annie posted an Instagram story on her Instagram: @annieleblanc mentioning that it was no one’s fault for their break up and hoped that her fans would understand and continue to support and love both of them.

What is the Net Worth of Asher Angel?

Asher Angel has quite good earnings from his professional career as an actor. Havings tarted his career since the age of 5, Angel who is 18 as in 2020, has managed to amass a healthy fortune from his several appearances on theatre plays, series, and films. His net worth is estimated to be around $1.5 million.

How Tall is Asher Angel?

Asher Angel is a good-looking cute guy in his teens. With his marvelous acting skills and charming personality, Angel has managed to win several hearts all around the world. He stands tall with a height of 5ft. 8inch. while his body weighs around 58kg. He has a well maintained athletic body physique fair complexion with black hair, brown eyes, and a heart-melting smile.

Our contents are created by fans, if you have any problems of Asher Angel Net Worth, Salary, Relationship Status, Married Date, Age, Height, Ethnicity, Nationality, Weight, mail us at [email protected]