Ashley Benson is a famous American actress, model, and dancer who is best known for her role of Hanna Marin in the popular thriller TV Series Pretty Little Liars. 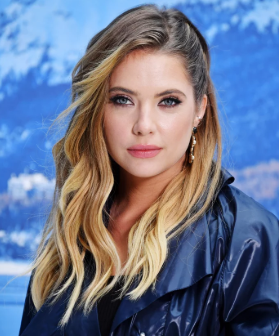 Ashley Benson is a famous American actress, model, and dancer who is best known for her role of Hanna Marin in the popular thriller TV Series Pretty Little Liars. She gains huge fame from the TV Show Days of Our Lives as Abigail Deveraux which was aired on NBC. Ashley made her acting debut with Nikki as Dancer in 2002. She was last seen in the major role of Roxie in the drama film Her Smell, which was released on 29 March 2019.

Ashley Benson and Cara Delevingne have a sizzling sex life, and they don’t care who knows!

In photos obtained by the Daily Mail, Cara and Ashley were spotted carrying a $657 sex bench into their home this week… giggling the entire time.

Cara recently chatted about her sex life with RuPaul’s What’s The Tee podcast. She said she “used to go out to clubs” but she’d “rather have sex than go out now.”

“Part of sex – the connection – is feral,” Cara continued. “You meet someone you go to the bedroom, it’s another animal.”

What is Ashley known for?

Where is Ashley Benson born?

Back to his early life, Ashley was born in Long Beach, California, USA. Her full name is Ashley Victoria Benson. She is the daughter of Shannon Harte and Jeff Benson. She has an older sister named Shaylene Benson, who previously was a cheerleader for the LA Lakers. She does not have any brothers.

Ashley is an American by nationality and she is of English, German, Irish, and Danish ethnicity. She started dancing competitively in ballet, jazz, hip-hop, and lyrical at age four. She also enjoys singing and has appeared in several musicals. At age four, she was asked to audition to sing a solo at four Christmas services at her church.

When did Ashley Benson pursue her career as a model and actress?

Does Ashley Benson win the awards?

Does Ashley Benson date someone?

Talking about her love life, Ashley Benson has been quite vocal about her romantic connections since the start of her acting career. She has been romantically involved with many celebrities. Her first publicly known relationship was with Justin Bieber’s ”swagger coach, Ryan Good, with whom she had an on-and-off relationship from 2011 until 2016. She and actor Chord Overstreet were an item in 2012. Ashley, then, began dating her Spring Breakers co-star James Franco in 2012, however, it didn’t last long, ending in 2013.

She and her Pretty Little Liars co-star Tyler Blackburn briefly dated in 2013. they were spotted kissing at Coachella that year, but they desperately denied any intimate relationship between them. She has been dating English model and actress, Cara Delevingne, since May 2018. After the split with Ryan, Ashley opened up that she is a lesbian.

How much is Ashley Benson’s net worth?

Ashley’s net worth has been estimated to be over $6 million, mostly aided her successful acting career in addition to several lucrative endorsement deals.

As a child, she made $6,000 per episode acting in the television series, Days Of Our Lives. She lives in her Los Angeles mansion, which is a 3,085 square foot house with three bedrooms and bathrooms located at Sunset Strip. The price of the house is estimated at $2.7 million. She owns a Range Rover in addition to a quite few exotic cars.

How tall is Ashley Benson?

Ashley has an incredibly hourglass-shaped body figure with a slim waist, round hips, and a large natural bust. Since she is also a dancer, she possesses quite natural physical attributes, complimenting her height and weight.

Our contents are created by fans, if you have any problems of Ashley Benson Net Worth, Salary, Relationship Status, Married Date, Age, Height, Ethnicity, Nationality, Weight, mail us at [email protected]