Ashley Aubra Jones is an American actress. She is known for her roles in soap operas as Megan Dennison on The Young and the Restless and as Dr. Bridget Forrester on The Bold and the Beautiful. 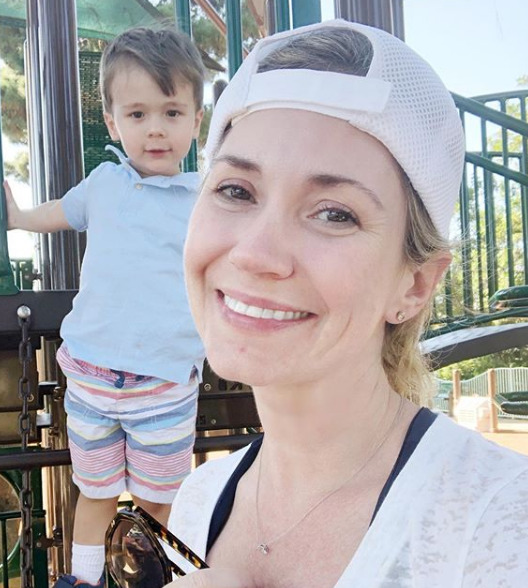 Ashley Jones is a popular American actress who is best known for her roles in soap operas as Megan Dennison and Dr. Bridget Forrester. Ashley Jones has appeared in soap operas, “The Young and the Restless” and “The Bold and the Beautiful”. Ashley Jones also appeared with the recurring role as Daphne on the HBO drama series, “True Blood” in 2009.

Ashley Jones Is In Headlines, Jones Filed For Divorce, His Husband Is Beating Her!

The beautiful star, Ashley Jones is in the headlines as recently on Friday, September 6, 2019, Jones filed a divorce against her husband, Joel Henricks. Jones claims that she is being abused physically by her husband, Henricks for a long time even before they got married in 2015.

In the filing, Jones also described one horrifying incident that Henricks once twisted her hand and threw her on the ground while she was recording him threatening her and trying to be physical back in 2016.

Jones also claims that Henricks has a past related to substance abuse and alcohol. She even added that Henricks began to get excessively drunk in 2018.

Even recently on August 16, 2019, Henricks accused her of having sex with someone else, he even claimed of having a recording of it which he played for the children which she completely denies.

The day before Jones filed for divorce, she shared a selfie with her son, Hayden on Instagram with a caption describing how important it is to be there for her son at this time.

What is Ashley Jones Famous for?

When and Where was Ashley Jones born?

Ashley Jones was born on September 3, 1976, in, United States. Her birth name is Ashley Aubra Jones. Her nationality is American. Jones belongs to white ethnicity while Virgo is her zodiac sign.

Ashley Jones was raised in Texas though she was born in Tennessee after her father, Shawn Jones who is a minister, took a job preaching in Texas. Jones was raised along with her two siblings, a brother, Zach and a sister, Jordan.

Ashley Jones did her schooling in Lamar High School and then she attended Houston High School for performing arts. Jones was very much interested in acting and she used to take part in various plays whenever she used to get a chance. Jones then got graduated from Pepperdine University.

Jones started to appear in films and commercials at the age of 5. Jones starred in several theatre productions in the Actors Theatre of Houston including, “The Women”, “Ah”, and “Wilderness!” at an early age of 9.

When Jones was 12, Jones appeared in “The Chalk Garden”.

How far has Ashley Jones Gone In Her Professional Career?

Ashley Jones started her professional career when she was too young. In 1997, when Jones was 21, she appeared on the long-running CBS soap opera named “The Young and the Restless” as Megan Dennison. She continued with the role for three years till 2000.

Later in 2001, she again appeared in the show for which she received two “Daytime Emmy Award” nominations. Later in December 2004, Jones appeared on another soap opera, “The Bold and the Beautiful” as Dr. Bridget Forrester for eight long years until February 2012.

Ashley Jones is married twice in her entire life to date. Previously, Jones was married to Noah Nelson, an actor. Nelson is also the son of the actor, Craig T. Nelson. The couple got married on August 17, 2002.

They were having a great life in the beginning but later on, in May 2009 after almost seven years of marriage, they decided to divorce.

After her divorce in 2009, Jones met the IT infrastructure manager, Joel Henricks. Jones and Joel’s engagement was announced in November 2015. A few months after on February 1, 2016, the couple announced that they were married. Their wedding was a small courthouse wedding.

On May 24, 2016, they welcomed a son named Hayden Joel Henricks. However, on September 6, 2019, Jones filed for divorce against her husband, Joel Henricks as he is accused of beating her.

Is Ashley Jones A Millionaire?

Keeping all the hard works and time that Ashley Jones has put on her career, Jones has managed to amass a great fortune of the amount in dollars through her career via movies and modeling.

Jones has a well-managed career which gives her an estimated net worth of $1.5 million dollars. Besides, Jones has an annual salary of around $600-900.

In addition, Jones further adds more fortune to her bank balance through several endorsement deals and promotions. She also does cameos in particular movies to add up more money.

With all the amount that Jones has in her account, Jones has been able to live a lavish and luxurious lifestyle.

How tall is Ashley Jones?

The beautiful actress, Ashley Jones has a well maintained perfect curved body physique. Considering all her workouts and exercises, Jones has managed to get a fit and healthy body. Jones stands tall with a height of 5ft. 7inches.(1.70m).

Talking about her looks, Jones has a fair complexion with light brown hair and dark brown eyes.

Our contents are created by fans, if you have any problems of Ashley Jones Net Worth, Salary, Relationship Status, Married Date, Age, Height, Ethnicity, Nationality, Weight, mail us at [email protected]