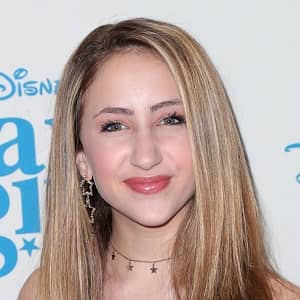 Ava Kolker is an actress, singer, and model from America. She made her breakthrough from her role on the former Disney Channel show, Girl Meets World. Moreover, she has appeared in other television shows and movies, with each appearance making her more and more popular.

How old is Ava Kolker?

Ava Kolker is currently aged 14 years old, as she was born on December 05, 2006, in Los Angeles, California, United States. Talking about her childhood and family, her father‘s name is Doug Kolker and her mother‘s name is Sandrine Kolker.

She grew up playing with her three siblings (sisters); Lexy Kolker, Kayla Kolker, and Jade Kolker. Moreover, Ava mentions being an animal lover who is passionate about stopping animal cruelty and abuse. Currently, there is no information on her educational background, but she seems to be a school student concerning her age.

How did Ava Kolker rise to stardom?

Ava Kolker started her career as the role of a small girl when she was just four years old. She did her first role in the TV show ‘American Horror Story’ and later went on to act in other movies. She did a movie, ‘Trials of Cate McCall’, comedies such as ‘Scary Movie 5’ and horror movies such as ‘Mama’ and ‘Villisca’. As she moved up the ladder, she became a versatile actress for the role of Lily in the comedy film ‘Scary Movie 5’ and the role of Ava in ‘Girl Meets World’.

Little did we know, she appeared as Princess Jasmine in the musical drama ‘Aladdin’ and played the part of Corny Collins in the movie ‘Hairspray’. Soon after, she was dragging her modeling assignments as well as she appeared on the ramp wearing clothes from two designers during the LA Fashion Week held in 2015. Besides, walking on the ramp, she also appeared in commercials and ads which have been produced by Square TV and AT&T.

Recently, in 2019, she made an appearance a minor voice role in the film Red Shoes and the Seven Dwarfs. The same year, she issued her debut single, “The Good Ones” in July. Moreover, she has released her second single “Eventually” In February 2020.

It is no surprise that Ava is a multitalented star who’s earning her fame in the entertainment industry for quite a while now. In 2016, she won the title of Young Entertainer Award for Best Recurring Young Actress 9 and Under – Television Series. Moreover, she was nominated for Young Artist Awards Best Performance in a TV Series for Guest Starring Young Actress in 2017.

What are the body measurements of Ava Kolker?

The 14-year-old actress stands tall at a height of 4 feet 10 inches and weighs roughly about 42 kgs. As she is still at a very young and growing stage of life, there is no information regarding her chest-waist-hip size. However, she has blonde hair color and a pair of blue-colored eyes.

How much net worth does Ava Kolker hold?

Talking about the young star’s net worth and salary, she has just stepped into her profession and there are currently no details concerning her earnings. However, she has an estimated net worth of around $100,000. Similarly, she has earned much which could fill up her needs. According to some sources, her financial statements are handled by her parents.

Is Ava in a relationship?

Referring to the dating life of Ava, she is too young to be dating anyone at the moment. According to her social media, she seems to be currently living a single life and focusing on her career and giving more time to herself.

There is nothing on her love history as well since she hasn’t dated anyone till now. Similarly, she seems to be quite a secretive person as she doesn’t speak about her personal life in the media or public. Moreover, her name isn’t linked to any sorts of rumors or controversies either.

Our contents are created by fans, if you have any problems of Ava Kolker Net Worth, Salary, Relationship Status, Married Date, Age, Height, Ethnicity, Nationality, Weight, mail us at [email protected]