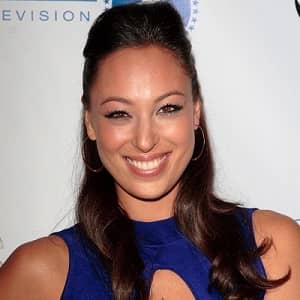 Aya Sumika was born as Aya Sumika Koenig on August 22, 1980, in Seattle, Washington, USA. As of 2021, her age is 40 years and her zodiac sign is Leo. She has not revealed the name of her father but he is German and her mother, Midori is Japanese-American.

Talking about her educational background, she went to the Northwest School in Seattle. Following that, she attended ‘The Juilliard School’ and studied ballet.

How did Aya pursue her career? Movies, TV Shows

Aya Sumika is currently known as an actress and fashion designer. She started her acting career in 2004 by making her debut with the TV series, ‘Hawaii’ in which portrayed ‘Linh Tamiya’. The same year, she appeared as Lori in ‘Bloodlines’.

Aya and her husband Trevor are the co-owners of ‘MIDORI Ribbon’ which was founded in 1989. It was founded by her mother and deals with ribbon-oriented fashion and designs. It is located in Los Angeles, California.

The company has been importing high-quality ribbons from all over the world and designing top quality gift wraps for decades. Furthermore, these wraps are well-loved by many businesses and brides and have their own website.

What is the Net Worth of Aya Sumika?

Aya Sumika has an estimated net worth of $700k as of 2012. She has a beautiful house which was even featured in the lifestyle blog and publishing company, ‘Apartment Therapy House Tour’.

Sumika stands at a height of 5 feet 9 inches and weighs around 55 kg. She has a pair of brown eyes and brown hair.

Who is Aya Sumika married to? Husband, Marriage, Children

Aya Sumika is currently married. She is married to her high school sweetheart, Trevor John. The couple exchanged wedding vows in 2007. Sumika was just 15 years old when they first met. Her husband is a businessman and they are partners and co-owners of ‘MIDORI Ribbons’.

From their marriage, they have a daughter named Misa who was born in 2012. There is not much information about their personal life as the couple likes staying low key and prefer staying private.

Sumika is active on Instagram. On her account, she has over 1.4k followers and mostly uploads her company, MIDORI’s products.

Our contents are created by fans, if you have any problems of Aya Sumika Net Worth, Salary, Relationship Status, Married Date, Age, Height, Ethnicity, Nationality, Weight, mail us at [email protected]