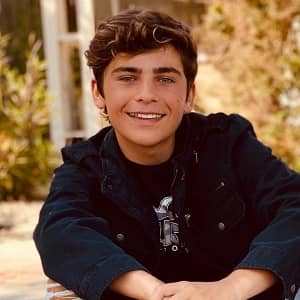 Ayden Mekus is a popular American actor and social media personality. Young Ayden is popular among movie fans for portraying Max Grainger in the short movie, The Lilac Thief.

When was Ayden Mekus born?

Ayden Mekus was born on the 2nd of August, 2005 in Northern California, U.S.A. As of 2020, his age is 15. His nationality is American and his ethnicity is Caucasian. It’s also worth noting that he is of British-Irish descent.

Ayden was born to parents Larry Mekus (father) and Maria Mekus (mother). Larry works as a businessman and is the co-founder of the clothing line, Positive Choice Apparel. Ayden spent his childhood in Coronado Island in California. His support from his parents has helped him become somewhat established in the movie industry. He also seems to be very close to his mother and his Instagram features a few pictures of her. He has not said anything about his siblings so he might be a single child.

As for his education, Ayden is homeschooled at the moment as he was a victim of bullying when he was in private school.

How did Ayden Mekus build his career?

Ayden had a passion for acting and dancing from a young age. Thanks to the support from his parents he was able to act in a short movie in December of 2017. This role was noticed and shortly after, in February of 2018, Ayden got the lead roles in 2 short movies. These movies were The Lilac Thief and Chocolate Chip Cookie. Both movies were successful, and his portrayal of Max Grainger in The Lilac Thief received a lot of praise and launched him into the limelight. Since then, he has appeared in other short movies such as Utensils, Critical Candle, and Anatomy. He has not acted in a feature film until now, but by the looks of it, his feature film debut is coming in the near future. Ayden has also followed his passion for dance and gave brilliant performances in Winter Wonderland and Dance Variety Showcase in San Diego.

Thanks to the success of his short movies, he has received a lot of positive attention. All of this has helped him grow his social media. And so, he is already a huge personality on Instagram with over 322k followers on his account. Having experience with bullying himself, Ayden is now campaigning against it as the founder of a popular clothing line, Positive Choice Apparel.

What is Ayden Mekus’s net worth?

As of 2020, Ayden has an estimated net worth of around 1 million U.S. dollars. He has not revealed the details of his annual salary as of yet.

What are Ayden Mekus’s physical statistics?

Ayden is blessed with good looks along with blue eyes and brown hair. He has a fit physique. The exact details on his height, weight, and other physical statistics have not been revealed.

Who is Ayden Mekus dating?

Ayden is currently in a relationship with young actress Symonne Harrison. The couple just recently began their relationship in 2020. They look extremely cute together and have already featured each other on their respective Instagram accounts. Ayden is still young so it’s likely that he did not have any girlfriends in the past.

Ayden is active and very popular on social media. His talent in acting, his looks, and likable personality have all helped him gain a huge number of followers. As of now, Ayden has over 324k followers on Instagram, over 2k followers on Twitter, and over 1k followers on Facebook.

Our contents are created by fans, if you have any problems of Ayden Mekus Net Worth, Salary, Relationship Status, Married Date, Age, Height, Ethnicity, Nationality, Weight, mail us at [email protected]