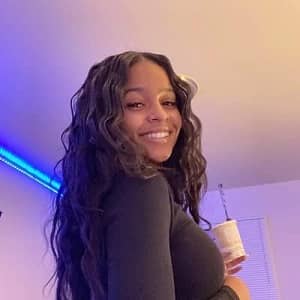 Bailei Knight is a popular American Celebrity Kid. Bailei was a popular figure since her birth thanks to her popular mother Michel’le and notorious father Suge Knight.

When was Bailei Knight born?

Bailei Knight was born on the 28th of November, 2002 in the U.S. As of now, her age is 18. Her nationality is American and her ethnicity is African-American.

Talking about her parents, Bailei was born to Marion Hugh Knight Jr. aka Suge Knight (father) and Michel’le Denise Toussant (mother). Her father is a big name in the music industry as the co-founder and CEO of Death Row Records. Michel’le is also a recognized figure in the industry as an R&B singer and rapper in the 80s and 90s. Her parents didn’t stay together for long though and got divorced when Bailei was only 5 years old. Bailei was raised by her mother after the divorce. Although she has no biological siblings, Bailei has 5 half-siblings. Among them, a half brother is from her mother’s relationship with Dr.Dre. And the other three half brothers, Taj, Andrew, Legend, and a half-sister, Posh, are from her father’s relationships.

Talking about her education, Bailei is a high school graduate and is currently deciding if she wants t go to college or not. She has not revealed where she graduated high school from as of now.

How did Bailei Knight rise to fame?

Bailei rose to fame thanks to her popular parents. Aside from being famous figures in the music industry, Suge and Michel’le’s relationship was also really tumultuous and made the news frequently. Michel’le was really popular in the ’80s and ’90s for songs such as No More Lies and Something in My Heart among many others. She was also featured on the reality TV show R&B Divas: Los Angeles, which made her even more popular. Suge was also a popular music executive and the CEO of Death Row Records, which managed rappers such as Tupac Shakur, Snoop Dogg, and Dr.Dre. Michel’le was married to Dr.Dre when she met Suge. But at this time, their relationship had already gotten very toxic due to Dr.Dre’s drinking habits. Suge was in prison at the time for assault convictions and violations of probation and parole when he met Michel’le.

Suge helped her in these hard times and they eventually got married in 1999. In 2002, they welcomed their daughter Bailey and it seemed as though things would go smoothly for them. But that was not the case as they got into arguments and separated in 2005, before getting officially divorced in 2007. Bailei was raised solely by her mother after this. Suge also got a lot of negative attention recently after he was sentenced to 28 years in prison. This sentence came after he was charged with voluntary manslaughter for the 2015 hit and run in which Terry Carter and Cle Shadeed died.

What is Bailei Knight’s net worth?

Bailei has not revealed anything regarding her net worth or annual salary as of now.

What are Bailei Knight’s physical statistics?

Bailei stands at a height of 5 feet 3 inches and her weight is approximately 54 kilograms. She is also blessed with good looks and has a balanced figure with black hair and black eyes. She has not revealed her body measurements as of now.

Who is Bailei Knight dating?

As of now, Bailei Knight is most probably single. She has kept her personal details and love life very private and so, information on her previous boyfriends and relationships is also not available.

Our contents are created by fans, if you have any problems of Bailei Knight Net Worth, Salary, Relationship Status, Married Date, Age, Height, Ethnicity, Nationality, Weight, mail us at [email protected]