Barbara Bush was the wife of 41st President of the United States, George H.W. Bush. 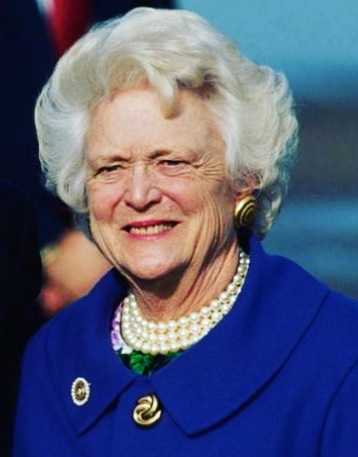 As the 41st President of the United States, George HW Bush passed away on 30 November 2018, at the age of 94, he has reunited with his beloved wife, Barbara Bush and their daughter, Pauline Robinson Bush, who died at the age of 3 due to leukemia. Clarion Ledger cartoonist Marshall Ramsey paid tribute to the late President by reuniting him with his loved ones via a heartfelt cartoon. The cartoon shows Bush flying a plane through the clouds, who is welcomed by his beloved wife and daughter saying “We Waited For You”. It was the plane he flew in the Navy during his military services in the World War II.

Barbara Bush was born as Barbara Pierce to Marvin Pierce and Pauline Pierce. She was born on 8 June 1925. Her birthplace is Flushing, New York in the United States. She has 3 siblings, Martha, James, and Scott. She grew up in the suburban town of Rye, New York. She attended Milton Public School, Rye Country Day School, and Ashley Hall boarding school. She was athletic while growing up and enjoyed swimming, bike riding, and playing tennis. Her interests in reading also began at her young age.

Barbara was diagnosed with Graves’ disease in 1988. She was a heavy smoker. She quit smoking in 1968. She was also diagnosed with congestive heart failure and chronic obstructive pulmonary disease (COPD). Following deteriorations in her health conditions, Barbara died at the age of 92 on 17 April 2018 in her home in Houston. Former Presidents of the United States and some foreign leaders expressed their condolences. On 21 April 2018, her funeral was held at St. Martin’s Episcopal Church in Houston and was buried at the George Bush Presidential Library in College Station, Texas.

Our contents are created by fans, if you have any problems of Barbara Bush Net Worth, Salary, Relationship Status, Married Date, Age, Height, Ethnicity, Nationality, Weight, mail us at [email protected]