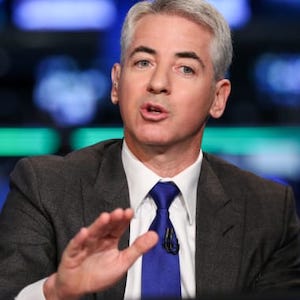 Bill Ackman is an American investor, hedge-fund manager, and philanthropist.

He is the founder of the hedge-fund management company ‘Pershing Square Capital Management’ and serves as its CEO.

How old is Bill Ackman?

Bill Ackman was born William Albert Ackman on May 11, 1966, in Chappaqua, in Westchester County, New York to Ronnie I. (née Posner) and Lawrence David Ackman. His father, David served as the chairman of the ‘Ackman–Ziff Real Estate Group,’ which is a real-estate financing firm in New York. Bill holds American citizenship but his ethnicity is unknown.

All About Bill Ackman’s Career

He began his career in the real-estate business, working for his father at a commercial real-estate mortgage brokerage in New York as the chairman, ‘Ackman Brothers & Singer Inc.’

In 1992, Bill along with his Harvard classmate David P. Berkowitz established ‘Gotham Partners,’. This is an investment firm that made small investments in public companies. Furthermore, he served as a co-investment manager at ‘Gotham LP,’ ‘Gotham III LP’ and ‘Gotham Partners International’ from 1993 to 2003.

Likewise, he collaborated with the New York City-based American conglomerate and investment holding company ‘Leucadia National’ in 1995, to bid for ‘Rockefeller Center.’ which helped the investors’ attention toward ‘Gotham Partners.’ The firm collected impressive clientele, leading to US$ 500 million in assets by 1998.

By 2002, ‘Gotham Partners’ had many stakes and was entrenched in litigation, where ‘Gotham’ also made investments. Ackman had to finally liquidate the funds of the firm in 2003, owing to bad debts.

Moreover, he was charged for copying statements of 725,000 pages regarding the financial services company in his law firm’s compliance with a subpoena.

Soon, he purchased ‘CDS’ against corporate debts of ‘MBIA,’ and as ‘MBIA’ crashed during the financial crisis of 2008, he made a fortune by selling the swaps. Reportedly, he made an attempt to caution the investors, regulators, and rating agencies regarding the high-risk business models of ‘MBIA.’ Similarly, ‘Bloomberg News’ reporter Christine Richard wrote a book, titled ‘Confidence Game,’ on Ackman’s battle with ‘MBIA.’

Furthermore, he involved during a dispute in 2003 with an American businessman, investor, and philanthropist Carl Icahn. The dealt was ‘Hallwood Realty.’ The feud resulted during a lawsuit that eventually led to the favor of Ackman after eight years. And he got USD $9 million from Icahn.

Who is Bill Ackman Married to?

On July 10, 1994, he married landscape architect Karen Ann Herskovitz and welcomed three children. But, the couple divorced in 2017. After that, he is living his single life.

In 2004, he along with his ex-business partner, ‘Leucadia National’ founded the American hedge-fund management company and named it as  ‘Pershing Square Capital Management’ with an investment of US$ 54 million.

‘Pershing’ acquired a tenth stake in ‘Target Corporation’ in December 2007 and presently owns a 7.8% stake. A 38% stake was held by his funds within the ‘Borders Group’ in December 2010.

Likewise, the 2016 presidential election within the US saw him endorsing Michael Bloomberg as a possible candidate within the presidential race. Also, he is famous for his generous donations to Democratic organizations, like the ‘Democratic Senatorial Campaign Committee,’ and to Democratic candidates, like Robert Menendez and Richard Blumenthal.

What is Bill Ackman Net worth?

Ackman is widely known for his philanthropic work. Moreover, he has donated US$ 6.8 million to the ‘Center for Jewish History’. Also, his foundation donated US$ 1.1 million to the ‘Centurion Ministries’ in Princeton, New Jersey and also to the ‘Innocence Project’ in New York City. Also, he is one among the signatories of ‘The Giving Pledge’ campaign and has committed to donating a minimum of half his wealth to charitable causes.

Bill has an estimated net worth of around $2 million USD.

Bill is quite concerned about his reputation and does not want to be engaged in unnecessary rumors and controversies.

How tall is Bill Ackman?

He has a height of 5 ft. 9 inches and weighs 75 kg. Also, he has salt and pepper hair and dark brown eyes.

Our contents are created by fans, if you have any problems of Bill Ackman Net Worth, Salary, Relationship Status, Married Date, Age, Height, Ethnicity, Nationality, Weight, mail us at [email protected]