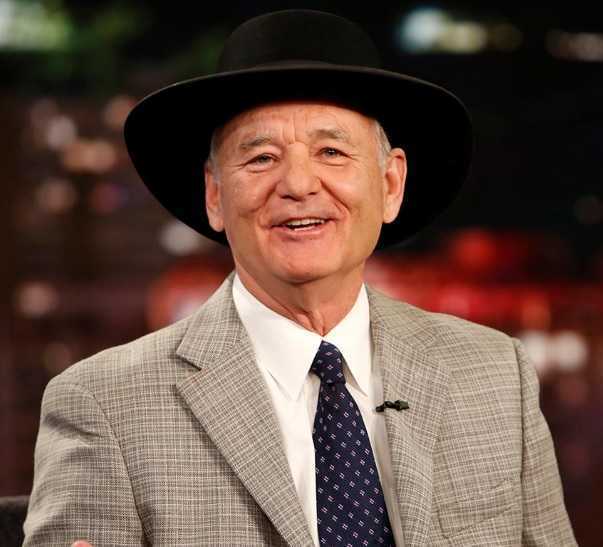 William James Murray, popularly known as Bill Murray is an American actor, comedian, and writer. He rose to prominence after he performed at Saturday Night Live. He is best known for films, Lost in Translation, Ghostbusters, Rushmore, Hyde Park on Hudson, St. Vincent, and HBO miniseries Olive Kitteridge. Among several awards he won, he as 2 Primetime Emmy Awards, 1 Golden Globe Award, and 1 BAFTA Award. He also received the Mark Twain Prize for American Humor in 2016. His comedy is known for its deadpan comedy.

What is Bill Murray Famous For?

Where was Bill Murray Born?

Bill Murray was born on 21 September 1950. His birth name is William James Murray. He was born to a father, Edward Joseph Murray II, and a mother, Lucille Murray. His birthplace is in Evanston, Illinois in the United States. He holds an American nationality. His zodiac sign is Virgo. He grew up in a northern suburb of Chicago, Wilmette, Illinois. He has 8 siblings.

He attended St. Joseph’s grade school and Loyola Academy. He later joined Jesuit High School. He worked as a golf caddy to fund his education.

He was the lead singer of a rock band called the Dutch Masters during his teen years. After graduating from high school, he attended Regis University in Denver, Colorado. He quickly dropped out of the University and returned to Illinois. He was later awarded an honorary Doctor of Humanities Degree by Regis in December 2007.

He started his career at an improvisational comedy troupe, The Second City. His older brother invited him.

He got his first television role as a cast member of the ABC variety show Saturday Night Live with Howard Cosell in 1975.

He rose to prominence after joining the cast of NBC’s Saturday Night in 1976.

He made his film debut in an uncredited role in the 1976 film, Next Stop, Greenwich Village.

He returned to films in 1988 in Scrooged.

He gave hit films such as Ghostbusters II, What About Bob?, Groundhog Day, Rushmore after returning to films.

His other major films are Wild Things, Hamlet, Lost in Transition, Mystic River, Charlie’s Angel, among others.

He took a break from acting once again in 2005.

He returned to films in minor and cameo roles.

He had voice roles in the Garfield franchise, Fantastic Mr. Fox, The Jungle Book.

He has been a part of ensembles since 2010. His major films are Moonrise Kingdom, Grand Budapest Hotel, St. Vincent.

He is a partner with his brothers in Murray Bros. Caddy Shack, a restaurant. They have opened at several locations.

He is a part-owner of the St. Paul Saints independent baseball team and occasionally travels to Saint Paul to watch the team’s games.

He also owns part of the Charleston RiverDogs, the Hudson Valley Renegades, and the Brockton Rox.

He also had investments in a number of minor league teams.

He was inducted into the South Atlantic League Hall of Fame for his ownership and investment activities in the league in 2012.

Who is Bill Murray married to?

He married Margaret Kelly on Super Bowl Sunday in Las Vegas in January 1981. Margaret gave birth to two sons Homer and Luke. While still married to Margaret, Bill was in a secret affair with Jennifer Butler. Bill and Margaret divorced in 1996. He then married Butler in 1997. Butler and Bill share four children together, Caleb, Jackson, Cooper, and Lincoln. The couple got divorced in June 2008.

On is 20th birthday, on 21 September 1970, he was arrested at Chicago’s O’Hare Airport for trying to smuggle 10 lb of cannabis. He was convicted and sentenced to probation.

What is Bill Murray Ne Worth?

Bill Murray earns from his acting career. In his long career in the entertainment industry, he has worked in numerous films and television series. Besides the entertainment industry, he also has business ventures including his business partnership with his brothers. He also has investments in several baseball teams. As of 2019, his net worth is estimated at $140 million.

How Tall is Bill Murray?

Bill Murray stands at a height of 1.88 m i.e. 6 feet and 2 inches tall. He has an average body build. He has blue eyes and his hair color is grey.

Our contents are created by fans, if you have any problems of Bill Murray Net Worth, Salary, Relationship Status, Married Date, Age, Height, Ethnicity, Nationality, Weight, mail us at [email protected]