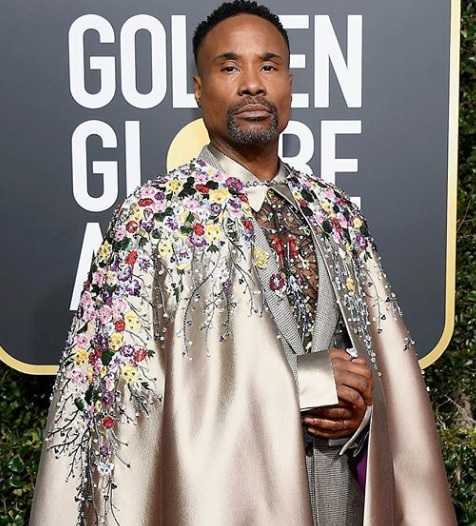 Billy Porter is an American stage performer, singer, actor, writer, and director. He rose to prominence performing on Broadway. He has appeared in numerous plays, films, and television shows. He later pursued his career as a singer. He is the recipient of Tony Award, Grammy Award, Outer Critics Circle Award, and Drama Desk Award, among others.

Pose star, Billy Porter, 49, made a distinctive appearance on the Oscars red carpet on Monday. Designed by Christian Siriano, Billy arrived at the Dolby Theater in Los Angels wearing a custom high-necked tie with velvet bow-tie, a sweeping skirt, and ruffled white sleeves, stole the show on the red carpet.

The 49-years old went to Instagram to thank his designer. He wrote, “When you come to the Oscars, you must dress up. Thanks, @csiriano for creating this custom couture masterpiece. @oscarheyman you have outdone yourselves once again with your iconic jewels.”

Where is Billy Porter from?

Billy Porter was born on 21 September 1969. He was born to a father William E. Porter, and a mother, Clorinda Jean Johnson Ford. His birthplace is in Pittsburgh, Pennsylvania, in the United States. He holds American nationality. He has a sister, Mary Martha Ford.

He attended Carnegie Mellon University College of Fine Arts, where he graduated with a B.F.A in Drama. He attended the Musical Theatre program at Pittsburgh Creative and Performing Arts School’s School of Drama. He also earned a certification from the graduate-level Professional Program in Screenwriting at the University of California.

He was the member of an entertainment group, “Flash” during the summers of 1985-1987. They performed daily at Kennywood Park in West Mifflin, Pennsylvania.

When was Billy Porter in Kinky Boots?

In 1994, he played the Teen Angel in the Broadway revival of Grease!.

He has later appeared in Topdog/Underdog at City Theater, Jesus Christ Superstar and Dreamgirls at Pittsburgh Civic Light Opera, and the song cycles, “Myths and Hymns” and “Songs for a New World” (Off-Broadway, 1995).

In 2005, he wrote and performed in his one-man autobiographical show, Ghetto Superstar (The Man That I Am) at Joe’s Pub in New York City.

He originated the role of “Lola” in Kinky Boots on Broadway in 2013.

He later reprised the role of Lola in Kinky Boots in September 2017.

He has also appeared in numerous films. His major role comes as Shiniqua in 1997 film, Twisted.

He later appeared in the films, The First Wives Club, Intern, The Broken Hearts Club: A Romantic Comedy, Noel, and The Humbling.

He has released three solo albums and one collaboration album in total. They are Billy Porter in 1997, At the Corner of Broadway+Soul in 2005, and Billy’s Back on Broadway in 2014.

He wrote the play While I Yet Live. It premiered Off-Broadway at Primary Stages in September 2014.

He has performed at various concerts in New York City.

He has been appearing in the FX show, Pose since 2018.

He will also appear in the eighth season of American Horror Story.

Nominated for 2005 “Outstanding New York Theater: Broadway & Off-Broadway Award” at the 17th GLAAD Media Awards for Ghetto Superstar (The Man That I Am).

2013 Broadway.com Audience Choice Award for Favorite Actor in a Musical for Kinky Boots.

2013 Drama Desk Award for Outstanding Actor in a Musical for Kinky Boots.

2013 Tony Award for Best Actor in a Musical for Kinky Boots.

2013 Outer Critics Circle Award for Outstanding Actor in a Musical for Kinky Boots.

Billy Porter is a married man. His sexual orientation is gay. Thus, he is married to Adam Smith. They tied a knot to each other on 14 January 2017. Other personal information about him is currently unavailable.

He has black hair and black eyes. He belongs to black ethnicity.

How much is Billy Porter worth?

Billy Porter has achieved success working in the Broadway. As a singer, he has also released 4 albums. Besides, he has appeared in numerous films and television shows. Working in the entertainment industry is his main source of income. As of 2019, his net worth is estimated at around $4 million.

Our contents are created by fans, if you have any problems of Billy Porter Net Worth, Salary, Relationship Status, Married Date, Age, Height, Ethnicity, Nationality, Weight, mail us at [email protected]