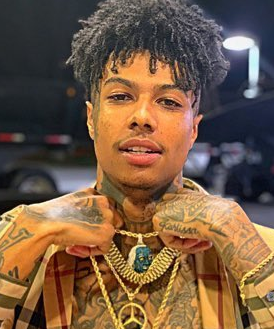 Johnathan Michael Porter famed as Blueface is an American rapper and songwriter. He became a viral internet meme after releasing the music video for his song “Respect My Crypn” in October 2018 due to his off-beat style of rapping and his tattoo of Benjamin Franklin on the side of his face. In 2019, his song, “Thotiana”, was re-released and became his most successful single to date, peaking at #8 on the Billboard Hot 100. Overall, he is a very talented rapper. He is also known as Blueface Bleedem, Jonathan Porter, Blueface Baby, Famous Cryp.

Blueface Declares Himself the ‘Best Lyricist’ in the Game

On Thursday, the “Thotiana” rapper hit up Instagram to boldly crown himself the “best lyricist” in contemporary hip-hop. He also questioned why music fans continue to listen to the “other bullshit.” But, of course, he didn’t mention any names. “Hey cuz, that’s on my mom and my sis: I’m the best lyricist in the muthafuckin’ game, bro,” he said. “I might not have the best flow, sound-uh, I don’t know what the fuck ya’ll be listening to when ya’ll be listening to this other bullshit, but when it come to wordplay, cuz? Come on, bro.” Blueface then recited several lines from an unreleased track he previewed earlier this week. The snippet included a reference to the recent drama with his mom and sister, who he allegedly kicked out of his house after an argument.

Blueface Relies On His Fans To Defend Him Against Haters

There haven’t been many things Cardi B and Nicki Minaj have been able to agree on lately. One thing the two hip-hop queens have been able to see eye-to-eye on is that Blueface’s hit song “Thotiana” is one of the hottest records of 2019. Peaking at No. 8 on the Billboard Hot 100, the Scum Beatz-produced single spawned several other remixes and established the emerging rapper as the next big thing in hip-hop. Prior to becoming one of the hottest new acts in the game, Blueface, who began his rap career in 2017, had already delivered two projects before securing his spot in the 2019 XXL Freshman class: 2018’s Famous Cryp and the EP Too Coccy. Carefree in his approach to crafting his music, the 22-year-old rapper has drawn comparisons to legends like E-40 and Juvenile due to the off-kilter flow that finds him rapping against the current of whatever beat he’s on. Blueface is currently headlining the Buss Down tour and prepping the release of his project of the same name. Although he’s content with his position in the game, he envisions a life of leisure when looking to the future. “Ten years from now, I see myself in a crazy mansion [with] probably about 10 bitches,” he continues, “I’ll just get to sit at home and hang with the bitches all day.”

On 20th January 1997, Blueface was born as Johnathan Michael Porter in Los Angeles, California, the USA. As of 2019, he celebrated his 22nd birthday. He grew up in Mid City in West Los Angeles and attended multiple elementary schools before moving in with his mother in Santa Clarita Valley, but later settled in Oakland with his father. After settling down in San Fernando Valley, he attended Arleta High School and joined the football team, becoming the starting quarterback in 2014, standing at 6’4” and weighing 160lbs. He began to take an interest in rap music at a young age and mainly listened to 50 Cent, The Game, and Snoop Dogg. His nationality is American and his ethnicity is Black. His religion is Christian. There are no details regarding his parents. His mother’s name is Karlissa and he has a sister named Kali.

Blueface is a very handsome rapper with a lot of tattoos on his body. He has the tattoo of Benjamin Franklin on his cheek, which he calls his “signature.” In an interview with ‘30 Mile Exclusive,’ he stated that his tattoos reveal his history as a barber, his religious beliefs, his astrological sign, his material aspirations, and a slew of other things. He has also tattooed the name of his son on his right forearm. He has got a very stylish hairstyle with a charming smile on his face attracting a lot of people towards him. His body build is Athletic. He has a tall height of 6 ft 4 in or 193 cm and he has a balanced bodyweight of 78 KG.

The marital status of Blueface has not revealed yet but he has a son name Javaughn who was born in 2017. In one of the interviews with ‘Big Boy’s Neighborhood,’ Blueface disclosed that his son’s mother is a working woman so his son stays with him nearly every day. He is dating Jaidyn Alexis who often appears on his Instagram alongside his other girlfriend, Jiggy. As of today, Blueface is living a happy life without any disturbances.

Net Worth of Blueface

The net worth of this famous rapper, Blueface is estimated to have $700,000 as of 2019. But his salary has not been revealed yet. There is no doubt in the mind of his followers that he is earning a considerable amount of salary from his work. He is satisfied with his earnings.

Our contents are created by fans, if you have any problems of Blueface Net Worth, Salary, Relationship Status, Married Date, Age, Height, Ethnicity, Nationality, Weight, mail us at [email protected]