Bo Nix is an American football quarterback who currently plays for the Auburn Tigers. 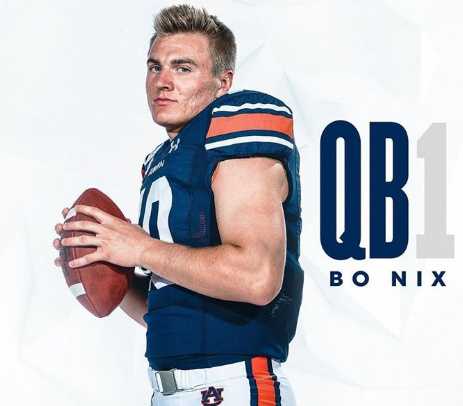 Bo Nix is an American football quarterback who currently plays for the Auburn Tigers. The son of the legendary player, Patrick Nix, Bo Nix is just on the right path of following his father’s pathway of leading the team in the field. Bo Nix marked his name in the field after the match against Oregon held on August 31, 2019.

Bo Nix Set a Mark of His Presence In the Field

What is Bo Nix Famous for?

When was Bo Nix Born?

Bo Nix was born on February 25, 2000, in the United States. His birth name is Bo Nix. His nationality is American. He belongs to White ethnicity.

Bo Nix was born to Patrick Nix(father) and Krista Nix(mother). His father Patrick is one of the best and most efficient quarterbacks who played quarterback at Auburn from 1992-1995.

Nix graduated from Pinson Valley High School and currently is attending Auburn University. He always wanted to start at quarterback for the “Auburn Tigers” since his childhood.

Bo Nix is on his Fleeks: Auburn University

Bo Nix marked himself as the great start opener in his first-ever game of college career against Oregon on August 31, 2019. He became the first true freshman to start a season as Auburn’s quarterback since Travis Tidwell in 1946.

Keeping his two interceptions–including a couple of critical errors and the fact that he completed only 13-of-31 passes for 177 yards aside, his 26-yard pass to Seth Williams with 9 seconds left gave the No. 16-ranked Tigers a lavish victory against No. 13-ranked Oregon.

He was the reigning Mr. Football and the No. 1-rated dual-threat quarterback recruit in the Class of 2019.

How tall is Bo Nix?

The 19 aged, Bo Nix has a well-maintained body physique. He stands tall with a height of 6ft. 2inch.(1.88m). His body weighs around 94kg(207 lbs). He has a fair complexion with blonde hair and blue eyes.

Our contents are created by fans, if you have any problems of Bo Nix Net Worth, Salary, Relationship Status, Married Date, Age, Height, Ethnicity, Nationality, Weight, mail us at [email protected]