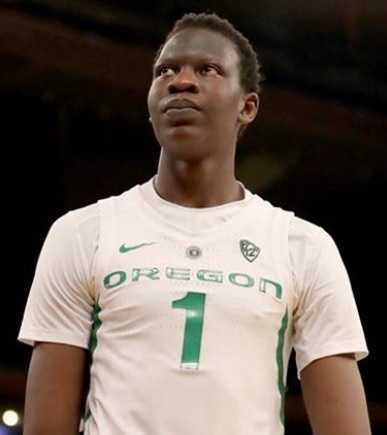 Bol Manute Bol, professionally known as Bol Bol is a Sudanese-born American college basketball player. He played for the Oregon Ducks of the Pac-12 Conference. He plays for the center position. He was considered one of the best basketball players in the class of 2018. He was rated a consensus five-star recruit. He has also earned McDonald’s All-American honors. He has also represented the United States at the international level. The Miami Heats selected him with the 44th overall pick in the 2nd round of the 2019 NBA draft and was traded to the Denver Nuggets.

Oregon freshman star, top-five NBA prospect, Bol Bol’s college career is officially over. Following a foot injury suffered earlier in December against San Diego, he underwent surgery on Thursday to repair a non-displaced fracture of the navicular bone in his left foot. He will need maximum time to recover fully and will miss the remaining of his season at Oregon.

He announced via social accounts, “Playing for my dream school under my favorite Coach Altman has been the Best part of my life and sadly it has come to end sooner than I would Like but thank you for all those who rocking with me & all Oregon fans thank you #GoDucks”

He thanked his supporters from Oregon. He also stated that he was privileged to play under his favorite coach Dana Altman.

His attorney, Bryan J. Freeman, released a statement providing the information about his surgery.

The 7 feet 2 inches tall is the son of the popular NBA star, Manute Bol, who was the second-tallest basketball player ever to play in the NBA.

Bol Bol was born on 16 November 1999. His birth name is Bol Manute Bol. He was born to Sudanese parents. His father’s name is Manute Bol and his mother’s name is Ajok Deng. He was born in Khartoum in Sudan. He has four siblings and six half-siblings. He has a brother named Madut Bol. His father was accused of being an American spy and was barred by the Sudanese government from fleeing to the United States. His family fled to Egypt and later landed in the United States as designated political refugees. They first lived in Connecticut and then moved to Olathe, Kansas. Kansas has a large South Sudanese population.

He holds an American nationality.

He started playing basketball at the age of 4.

As he reached the height of 6 ft and 5 inches while in 7th grade, he was featured in a highlight video at an Indianapolis basketball camp.

The highlight video drew attention from The Washington Post and CBS Sports.

He received his first NCAA Division I offer from New Mexico State. He was in eighth grade then.

As a freshman at the high school, he played for the junior varsity team of Blue Valley Northwest High School in Overland Park, Kansas.

He then transferred to Bishop Miege High School in Roeland Park, Kansas, and continued his freshman basketball season.

Due to transfer rules, he remained at the junior varsity level until February 2015.

He played for his under-15 Amateur Athletic  Union (AAU) team KC Run GMC at the Jayhawk Invitational in Kansas City, Missouri.

His performance for KC Run GMC received interest from Kansas and Oklahoma NCAA Division I programs.

Recruiting service 247Sports ranked him one of the top players in the class of 2018 in his second season.

He earned Class 4A-I first-team honors after leading his team to a 22-win season.

He then transferred to Mater Dei High School in Santa Ana, California for his junior year.

He led his Mater Dei team to the California Interscholastic Federation (CIF) final, where they finished as a runner-up.

He received offers from Arizona, USC, and Oregon.

He also received extended offers from Kentucky and UCLA.

He played for the California Supreme team at the Nike Elite Youth Basketball League (EYBL) in 2017.

In November 2017, he transferred to Findlay Prep in Henderson, Nevada. He chose to play college basketball for Oregon.

USA Today included him among 20 players in the preseason boys’ basketball team.

He earned a place at the 2018 McDonald’s All-American Boys Game during his senior season at Findley Prep.

He joined Oregon as a freshman in the 2018-19 season under Dana Altman.

He was considered one of the best prospects for the 2019 NBA draft.

He suffered a severe left foot injury on 12 December 2018 against San Diego.

The injury cost him the rest of the season.

The Miami Heat selected him in the 2nd round with the 44th overall pick in the 2019 NBA draft.

He was traded to the Denver Nuggets.

He was listed on the United States roster for the 2017 FIBA Under-19 Basketball World Cup. Head coach John Calipari cut him from the squad. He has played for the United States junior national select team at the Nike Hoop Summit in April 2018.

No rumors about his affairs have surfaced yet. He is young and focused on his basketball career. He is focused and ready to enlist for the 2019 NBA draft.

His father, the second-tallest NBA player ever died from kidney disease and complications from the skin disorder Stevens-Johnson syndrome in 2010.

Net Worth of Bol Bol

Bol Bol is an emerging basketball player. He is eyeing to enlist for the 2019 NBA draft. If he enters, the NBA draft, he will earn a recognizable fortune in coming years.

Our contents are created by fans, if you have any problems of Bol Bol Net Worth, Salary, Relationship Status, Married Date, Age, Height, Ethnicity, Nationality, Weight, mail us at [email protected]