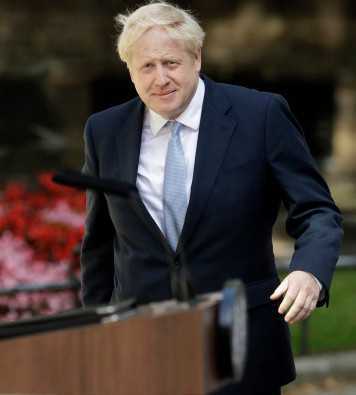 Alexander Boris de Pfeffel Johnson, popularly known as Boris Johnson is a British politician. He is currently serving as Prime Minister of the United Kingdom since July 2019. He is also serving as the Leader of the Conservative Party since July 2019.

What is Boris Johnson Famous For?

– Prime Minister of the UK.

Where was Boris Johnson Born?

Boris Johnson was born on 19 June 1964. His birth name is Alexander Boris de Pfeffel Johnson. His birthplace is in New York City in the United States. He was born to British parents in the United States. He has both American and British citizenship. He was born to a father, Stanley Johnson, and a mother, Charlotte Fawcett. He has Circassian-Turkish, English, German, French, Russian ancestry. He has 3 siblings, Rachel, Leo, and Joseph. He suffered from deafness while growing up. Thus, he had undergone several operations to insert grommets into his ears. His parents got divorced in 1980.

He attended Winsford Village School, Primrose Hill Primary School, and European School, Brussels I. He received a King’s Scholarship to study at Eton College in Eton, Berkshire. He was admitted to the Eton Society in later 1981. After completing his studies at Eton, he went to Australia, where he taught English and Latin at an elite independent boarding school at Timbertop.

He won a scholarship to read Literae Humaniores at Balliol College, Oxford. He was popular at Oxford. He won the position of Union president at Oxford in 1986.

He secured work for a management consultancy company, L.E.K Consulting. But he resigned after a week.

He then started working as a graduate trainee at The Times in later 1987.

He was dismissed from The Times after his article on the archaeological discovery of Edward II’s palace for the newspaper created a scandal.

He then worked at The Daily Telegraph.

His article largely influenced politics in the UK.

He was also given a regular column in The Daily Telegraph’s sister publication, The Spectator.

He was also given a column on new cars in the magazine GQ.

He got the editorship of The Spectator in 1999.

The Spectator dismissed Johnson as editor in 2005.

He also presented a popular history television show, The Dream of Rome in 2006 and After Rome in 2007.

He later signed a 12-month contract with Telegraph Media Group in July 2018.

He was selected as the party’s candidate for Clwyd South in North Wales, a Labour Party safe seat. He lost the general election.

He decided to stand as the Conservative candidate for a Conservative safe seat in Oxfordshire after Michael Heseltine retired.

He had already gained television fame by then.

He was appointed to a standing committee assessing the Proceeds of Crime Bill in Parliament.

Michael Howard became the Conservative leader, he appointed Johnson vice-chairman of the party.

Howard appointed Johnson to the position of shadow arts minister in 2004.

Howard dismissed Johnson as vice-chairman and shadow arts minister for publicly lying. He had lied about his affair with Spectator columnist Petronella Wyatt.

He was re-elected to the second term winning the 2005 general election.

He won the election to become Mayor of London in 2008.

He was re-elected as mayor to the second term in 2012.

He returned to the Parliament winning MP in the 2015 general election.

Johnson became Foreign Secretary in July 2016 after Theresa May became the leader of the Conservative Party and Prime Minister.

He resigned from Foreign Secretary in July 2018.

He returned to the role of a backbench MP.

After Theresa May resigned from Conservative leadership, Johnson stood for the leadership.

He won the leadership election in July 2019 defeating Jeremy Hunt.

In his first speech as a Prime Minister, he promised that the UK would leave the European Union on 31 October 2019.

Who is Boris Johnson married to?

Boris Johnson was married to Allegra Mostyn-Owen. They got engaged while at University. They later got married in September 1987. The couple separated in 1990 and their divorce was finalized in 1993.

He moved in with his childhood friend, Marina Wheeler in 1990. They got married in May 1993. He has four children, two daughters, and two sons. They separated in 2018.

He also had affairs with Petronella Wyatt, Anna Fazackerley. He is reportedly dating Carrie Symonds.

Our contents are created by fans, if you have any problems of Boris Johnson Net Worth, Salary, Relationship Status, Married Date, Age, Height, Ethnicity, Nationality, Weight, mail us at [email protected]