Brad Pitt is an American actor, producer, and philanthropist. 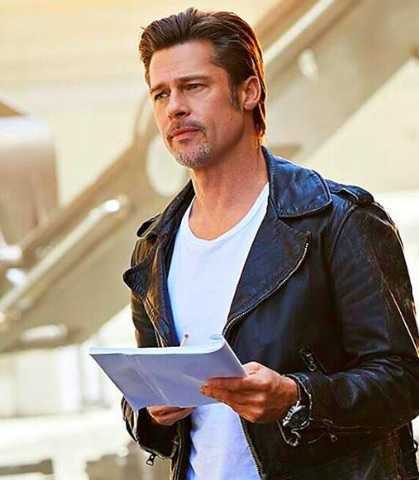 William Bradley Pitt, popular by the name Brad Pitt is an American actor, producer, and philanthropist. Starting his career in 1987, he is considered one of the most influential and powerful people in the American entertainment industry. He first gained recognition for his work in the 1991 road film, Thelma & Louise. He got a lead role in the 1992 big-budget drama film, A River Runs Through It. He has won over 60 awards and over 140 nominations for his work in several films to date. He won his first Award for his supporting role in the 1995 film 12 Monkeys. His other successful movies are Fight Club, Ocean’s Eleven and its sequels, Ocean’s Twelve and Ocean’s Thirteen, Troy, World War Z, Mr. & Mrs. Smith, The Curious Case of Benjamin Button, The Departed, 12 Years a Slave, The Big Short, and many more.

Hollywood icon Brad Pitt has found a new girlfriend and she is a German model, Nicole Poturalski. Though no official confirmation has surfaced, it is almost confirmed that the two has now a couple. Their dating rumors made headlines in August 2020 after Brad Pitt and the model was spotted together in France. Pitt flew France from the United States and Poturalski flew there from Germany. They were spotted together at Paris’s Charles de Gaulle Airport in France. Together, they flew to Pitt’s chateau in the South of France.

Bradd Pitt, who has formerly married to Angelina Jolie has 6 children, three of whom are adopted from different countries. Likewise, the German model also has a son from her previous relationship.

The rumor about one of the most influential Hollywood actors, Brad Pitt dating South African and American actress, Charlize Theron has heated up as many sources claimed their affairs.

Brad Pitt, 55, reportedly started seeing Charlize Theron, 43, over the Christmas holidays and has been seen sharing cozy moments when together.

Few weeks after Pitt and his estranged wife, Angelina Jolie reached the custody battle agreement, new reports of him dating an Academy Award winner have surfaced on the media.

One could easily guess about something going on seeing their cozy moments at the screening and party event of the film, Roma. However, neither of them has spoken about the rumors yet.

What made Brad Pitt famous?

Where is Brad Pitt from?

Brad Pitt was born on 18 December 1963. His birth name is William Bradley Pitt. He was born to a father, William Alvin Pitt, and a mother, Jane Etta. His birthplace is in Shawnee, Oklahoma in the United States. He holds an American nationality. He has 2 siblings, a brother, Douglas Mitchell, and a sister, Julie Neal. He grew up in Springfield, Missouri. He was raised Southern Baptist but later stated that he swings between agnosticism and atheism.

He attended Kickapoo High School. After graduating from high school in 1982, he enrolled in the University of Missouri majoring in journalism with a focus on advertising. He quit studies two weeks before the completion of the coursework for his graduation and moved to Los Angeles. He left his studies to learn about films. He took acting lessons and worked odd jobs.

What awards has Brad Pitt won?

Who is Brad Pitt girlfriend?

Brad Pitt first married an actress, Jennifer Aniston. They tied a knot to each other in a private ceremony in Malibu in July 2000. Five years later, they divorced in 2005.

He then started dating actress Angelina Jolie in 2005. After seven years, they got engaged in April 2012 and got married in a private ceremony in Chateau Miraval, France in August 2014.  The couple was dubbed “Brangelina” by the entertainment media. They separated in 2016. Jolie filed for divorce in 2016 and their divorce is yet to be finalized. They have 6 children together, of which, 3 were adopted from different countries.

Our contents are created by fans, if you have any problems of Brad Pitt Net Worth, Salary, Relationship Status, Married Date, Age, Height, Ethnicity, Nationality, Weight, mail us at [email protected]