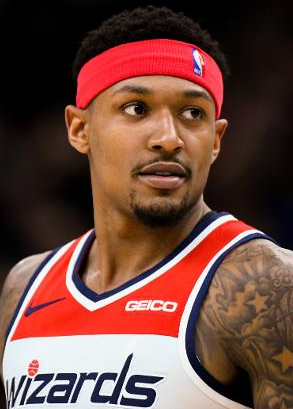 If we are to make a list of the top ten most popular basketballers, Bradley Beal would be one of them. He is an American professional basketball player with the Washington Wizards of the National Basketball Association (NBA). He has made a fortune in his career and is one of the highest-paid ballers in his team. Currently, he is rated as one of the most effective hands in Washington Wizards. Let’s explore more about him through this article.

What is Bradley Beal famous for?

An American professional basketball player for the Washington Wizards of the National Basketball Association (NBA).

When was Bradley Beal born?

Recalling his early life, Bradley Beal was born as Bradley Emmanuel Beal to American parents, Besta Beal and Bobby Beal in the year 1993. He was born and raised in St. Louis, Missouri, the United States along with his siblings, Brandon Beal, Byron Beal, Bruce Beal, and Bryon Beal.

Similarly, He is an American by his nationality. He is an Afro-American and his birth sign is Cancer.

For his education, He attended Chaminade College Preparatory School and further joined the University of Florida. He accepted an athletic scholarship to attend the university, where he played for coach Billy Donovan’s Florida Gators men’s basketball team during the 2011-12 season.

When did Bradley Beal begin his NBA career?

Moving towards his career, Bradley was drafted with the third overall pick in the 2012 NBA draft by the Washington Wizards. He was named the Eastern Conference Rookie of the Month in December 2012 and January 2013.

He joined Kevin Durant and Vince Carter as the only three players in NBA history, 23 years old or younger, to average at least 23 points and shoot above 40 percent from three-point range.

He became an NBA All-Star for the first time in 2018. In every season of NBA basketball, he performed his best against his opponent team.

He just started his playing career and he has a long career ahead. He is one of the youngest prominent players in the basketball world.

Reflecting on her personal life, Bradley is neither married nor single. Presently, he is involved in a romantic relationship with his long-time girlfriend Kamiah Adams, TV personality. Not only lovers, but the duo is now a proud parent of their child Bradley Emmanuel Beal II, whom they welcomed on 23rd July 2018. Later, they birth another child as well.

What is Bradley Beal’s salary?

Being a professional basketball player, Bradley earns the sum of a good amount of money and fame through his profession in the field of the sports industry. Based on some online reports, his estimated net worth said to be $30 million and his salary is somewhere around $25 million at present.

Talking about his assets, The Car collection of him is quite Small but owns the best luxury cars in the world. The Car brands owned by him include BMW, Range Rover, and Porche 911. He Resides in McLean. He Bought this French Provincial-style mansion in 2016. Estimated Value of this Real Estate Property around $3.2 Million.

How tall is Bradley Beal?

Observing his body statistics, Bradley is an impressive man by his personality. He has a perfect height of 6 feet and 5 inches. His total body weight is 94 kg. He is a brand ambassador for Nike footwear brand He is also socially active on social networking sites.

Our contents are created by fans, if you have any problems of Bradley Beal Net Worth, Salary, Relationship Status, Married Date, Age, Height, Ethnicity, Nationality, Weight, mail us at [email protected]