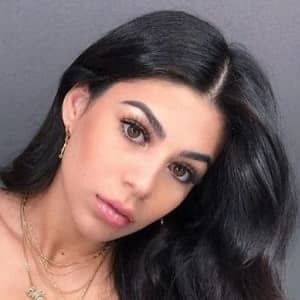 Bramty Juliette is a Chilean social media personality best known for her family Youtube channel, ‘The Bramfam’ which has over 2.6 million subscribers. Moreover, she has her own Youtube channel with over 453k subscribers and her TikTok account also has over 2 million followers.

How old is Bramty Juliette?

Bramty Juliette was born in Santiago, Chile, on June 19, 1995. As of 2020, her age is 25. She has not revealed anything regarding her parents, siblings, and childhood days. Her ethnicity is Spanish.

How did Bramty Juliette pursue her career?

Bramty started her YouTube journey with a joint channel titled ‘The Bramfam’ on October 21, 2014. On this joint-channel, she and Luis, her husband share fun and entertaining content including pranks, Q&As, challenges, and vlogs. Their vlogs showcase their life as young parents and how the couple handles their duties. Moreover, she has also explained many things regarding pregnancies, childbirths, etc which many people find extremely helpful.

Their most popular video is titled ‘Did a ghost push her on the swing? (Help)’ which has racked up over 10 million views. Some of their other popular videos include ‘DAD SAVES BABY FROM DROWNING!’, ‘MOTHER ABANDONS LITTLE GIRL IN THE STORE’, etc. As of August 2020, the channel has over 2.65 million subscribers and their videos have gained over 581 million views in total.

Juliette also has a secondary channel. The channel is dedicated to personal life videos and has over 453k subscribers and her videos have gained over 8.5 million views in total. In addition to this, she also has a TikTok account with more than 2 million followers and around 50 million likes.

In June 2018, Bramty and Luis embarked on their very own ‘BramFam’ tour.

Bramty stands at a height of 5 feet 6 inches and weighs around 50 kg. She has a well-maintained body with a curvy figure. Her hair color is brown and similarly, her eyes are also brown in color.

What is the Net Worth of Bramty Juliette?

Bramty Juliette has an estimated net worth of over $1.2 million as of 2020. She has done very well in her career as a Youtuber and social media personality. The ‘BramFam’ channel gets an average of 350k views per day which generates an estimated revenue of around $640,000 a year from the ads.

Who is Bramty Juliette married to? Husband, Marriage, Kids

Bramty Juliette is married to Luis Espina. She and her husband Luis are the co-owners of ‘The Bramfam’ Youtube channel. Luis has served as a sailor in the United States Navy. They met each other through a mutual friend after she moved next door and he introduced them to each other.

They started dating and were shocked as they got pregnant in their teenage. Both of them were 19 at the time. On March 10, 2015, Bramty gave birth to their daughter, Penelope. Later that year, the couple exchanged wedding vows because of Espina’s position in the Navy as they could not live together if they were not married.

In November 2018, Juliette gave birth to twins, Balcom and Levy.

Our contents are created by fans, if you have any problems of Bramty Juliette Net Worth, Salary, Relationship Status, Married Date, Age, Height, Ethnicity, Nationality, Weight, mail us at [email protected]