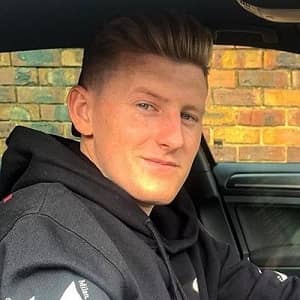 Brandonio is a social media personality and a YouTube star from Britain. The YouTube personality’s real name is Brandon Stewart but his better known with the title of his Youtube channel, ‘Brandonio’. He has earned his popularity through his challenges, pranks, and observational humor lists.

Brandonio’s full name is Brandon Stewart and he was born on May 3, 1998, in England. He holds the nationality of Britain and his current age is 22.

Talking about his family, he has a sister named Holly Bennett whom he has featured in his YouTube videos. Moreover, his mother’s name is Jessica and is available on Instagram under the username ‘@brandoniosmum’.

How did Brandonio start his career?

Brandon Stewart began his career from his YouTube channel on May 8, 2015. He started there with content such as challenges, pranks, and observational humor lists. Among the popular videos, his video titled, “5 Secret iPhone Tricks That No One Knows”, has earned more than thousands of views. He has even collaborated with other Youtube stars such as Lee Hinchcliffe.

Most of his videos are based on Pranks, Challenges & Vlogs where he features his sister and girlfriend. As he is well-liked by audiences, some of the most popular YouTube videos are ‘NEVER HAVE I EVER WITH MY LITTLE SISTER!!’, ‘SMASHING MY 12-YEAR-OLD SISTERS MAKEUP

*PRANK* (SHE WENT CRAZY)’, ‘I Said YES To EVERYTHING My Little Sister Said For 24 HOURS!!, ‘THROWING LITTLE SISTERS IPHONE IN POOL

*PRANK*’, and many more videos.

What is the net worth of Brandonio?

It is a matter of fact that the YouTube star would earn a decent amount of money out of his profession. Brandonio has an estimated net worth of around $111K.

What is the relationship status of Brandonio?

The 22-year-old star is currently in a romantic relationship with Erin Bowyer who is an Instagram star as well. She makes a regular feature appearance on Brandonio’s YouTube channel. The couple even shares their pictures on their respective social media accounts. And as per their posts, they seem to have a happy time together

Moreover, Brandon has set a clean-cut profile for his career by staying away from unnecessary rumors and controversies. According to him, he likes keeping distance between his personal and professional life.

Brandonio has a tall and athletic body structure. Unfortunately, he hasn’t made information about his exact height and weight public. His other body measurements like chest-waist-hip, shoe size, dress size, etc are not provided. However, he has blonde hair and a pair of blue eyes.

Brandon is such a pleasing star for any audience due to his good looks and personality.

As a Tik Toker, Brandon’s TikTok account has amassed over 94.4K followers and over 415.9K likes.

Our contents are created by fans, if you have any problems of Brandonio Net Worth, Salary, Relationship Status, Married Date, Age, Height, Ethnicity, Nationality, Weight, mail us at [email protected]