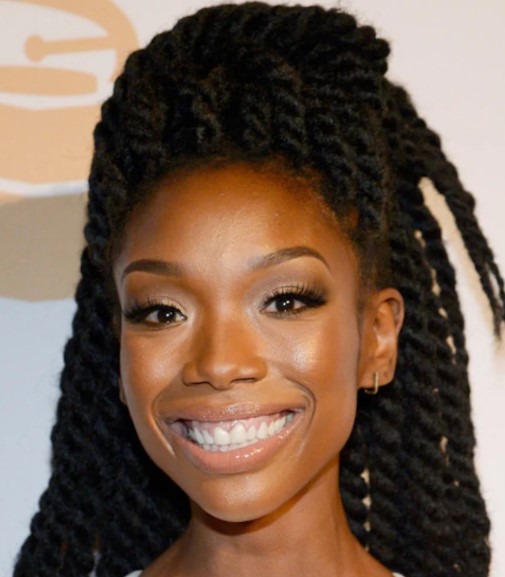 Brandy Norwood is an American R&B Singer-Songwriter, Composer, Actress, and Record Producer. She is known as a great R&B singer. Her debut album “Brandy” was released in 1994 and reached number twenty on the U.S. Billboard 200 chart. The album earned her several awards such as Billboard Music Awards and Kids’ Choice Awards. She has won the prestigious Grammy Awards on the category of ‘Best R&B Performance by a Duo or Group with Vocals’ for the song “The Boy Is Mine”. She is an older sister of singer and songwriter Ray J and also a cousin of rapper Snoop Dogg and WWE wrestler Sasha Banks.

The ‘Norwood Kids Foundation,’ created by Brandy and her brother Ray J, aims to “use performing arts as a catalyst to transform today’s youth into self-assured, disciplined, responsible, and compassionate individuals capable of making a positive impact in their communities.”

The next Verzuz fight will be between Brandy and Monica, it was revealed on August 22, 2020. On August 31, 2020, the fight will take place at Tyler Perry Studios in Atlanta, Georgia.

She has a sizable social media following, with about 4.4 million Instagram followers @brandy and 3.1 million Twitter followers @4everBrandy.

What did Brandy Norwood become known for?

As an American R&B singer-songwriter, she is well-known.

Brandy Norwood was born in the United States.

On February 11, 1979, Brandy Norwood was born in McComb, Mississippi, United States. Brandy Rayana Norwood is her given name. Her father, William Ray Norwood Sr., was a gospel singer and choir director, and her mother, Sonja Bates Norwood, worked for H&R Block as a district manager. Her younger brother, William Ray Norwood Jr., is better known by his stage name ‘Ray J.’ She is also Snoop Dogg’s cousin and WWE wrestler Sasha Banks’ cousin. In 1983, she and her parents relocated to Los Angeles, California.

Brandy Norwood is an African-American woman with a black ethnic heritage. Aquarius is her zodiac sign. Her faith is in Christianity.

Her educational experience includes attendance at the Hollywood High Performing Arts Center in Los Angeles, California, but she later dropped out and studied at home with a tutor.

When Brandy Norwood was two years old, she began singing in the church choir with her father and performed her first gospel solo.

She signed a deal with Teaspoon Productions in 1990 and started singing backup for Chris Stokes and Earl Harris’s R&B boy band Immature. After auditioning for the company’s director of A&R Darryl Williams, her parents organized a recording deal with the Atlantic Recording Corporation.

She co-starred with her co-stars in the short-lived ABC sitcom “Thea,” for which she was nominated for a Young Artists Award for Outstanding Youth Ensemble.

Her self-titled debut album “Brandy” was released in September 1994 and peaked at number twenty on the Billboard 200 chart in the United States. About six million copies of the album were sold worldwide.

The singles “I Wanna Be Down” and “Baby” were both certified gold and platinum by the Recording Industry Association of America after reaching the top of the Hot R&B Singles list.

She was the opening act for Boyz II Men on their nationwide tour in 1995, and she also performed for the films “Batman Forever” and “Waiting to Exhale.”

She released the single “Missing You” for the film Set It Off in 1996 with Tamia, Chaka Khan, and Gladys Knight. In the same year, she appeared alongside Sheryl Lee Ralph and William Allen Young in the TV comedy “Moesha.”

She starred alongside Whitney Houston, Jason Alexander, and Whoopi Goldberg in the musical fantasy television film “Cinderella” in 1997.

“Never Say Never,” Brandy Norwood’s second album, was released in June 1998 and went on to become her best-selling album, selling over 16 million copies worldwide. ‘The Boy Is Mine,’ a duet with American singer Monica from the soundtrack, became her first single to top the ‘US Billboard Hot 100.’ She also went on the Never Say Never World Tour the same year.

Brandy made her big-screen debut in the slasher film “I Still Remember What You Did Last Summer” in 1998, playing Karla Wilson, a supporting role.

She co-starred in the television romantic drama film “Double Platinum” with Diana Ross in 1999.
“Full Moon,” her third studio album, was released in February 2002, but it did not reach the same amount of success as her previous two albums.

Brandy released her fourth studio album, “Afrodisiac,” on June 28, 2004, and it became her most critically acclaimed album. The album reached number three on the Billboard 200 chart, with the single “Talk About Our Love” reaching number six in the UK.

“The Best of Brandy,” her first compilation album, was released in March 2005. Despite the lack of a promotional single, the album charted in the top 30 in Australia, the United Kingdom, and the United States.

In June 2006, she was cast as a judge on the talent competition show ‘America’s Got Talent,’ alongside David Hasselhoff and Piers Morgan.

“Human,” Brandy’s fifth studio album, was released in December 2008. The album peaked at number 15 on the Billboard 200 chart in the United States, but it fell short of its predecessors’ popularity.

Brandy and her brother Ray J, as well as their parents, debuted in the VH1 reality series “Brandy and Ray J: A Family Business” in April 2010. In the same year, she competed in season 11 of ABC’s reality show “Dancing with the Stars” as a partner with Maksim Chmerkovskiy.

She joined the cast of the comedy series ‘The game’ in 2011, portraying Chardonnay as a recurring character in the first season before becoming a regular.

In 2013, she starred in the romantic drama film “Temptation: Confessions of a Marriage Counselor.” Brandy played Melinda, a supporting character in the film.

Brandy posted a cover of Coldplay’s “Magic” to her TwitMusic account in July 2014, and it reached number one on Billboard’s Trending 140 list. She made guest appearances on VH1’s “Love and Hip Hop: Hollywood” and TV Land’s “The Soul Man” in the same year.

In 2015, Brandy made her Broadway debut in the Broadway musical “Chicago,” portraying Roxie Hart. She went on the Slayana World Tour and played the lead role in the BET sitcom “Zoe Ever After” the following year.

In January 2017, Brandy competed on the FOX reality cooking show “My Kitchen Rules” with her younger brother Ray J.

She made an appearance on the Fox musical drama television series “Star” in July 2018. Cassie was a recurring character in the series, and she was played by her.

She made an appearance on Daniel Caesar’s second album “Case Study 01” in June 2019, and their duet “Love Again” was released as a single in July. The song was number one on Billboard’s Adult R&B Songs chart. She released the hit single “Freedom Rings” the same year.

On July 31, 2020, Brandy released her seventh studio album, “B7.” The album debuted at number two on the UK Official Hip Hop and R&B Albums Chart Top 40 and number twelve on the Billboard 200. The album’s lead single, “Baby Mama,” entered the top ten on the Adult R&B Songs chart in the United States.

Awards and nominations for Brandy Norwood

She won the California Music Awards in 1998 for her second album, “Never Say Never,” in the category of “Outstanding R&B Album.”

She also won the ECHO Awards in 1999 in the category of “Best-selling Album by an International Newcomer.”

For the song “The Boy Is Mine,” she received the Grammy Award for “Best R&B Performance by a Duo or Group with Vocals” in 1999. From 1996 to 2020, she received multiple Grammy awards.

Brandy won her first NAACP Image Award in 1996, in the category of “Outstanding New Artist.” She has also received NAACP awards for “Outstanding Youth Actress” in 1997 for “Moesha” and “Outstanding Supporting Actress in a Comedy Series” in 2014 for the show “The Game.”

Stellar Awards presented her with the ‘Most Notable Achievement Awards’ in 2001.

Brandy received the Cathy Hughes Award of Excellence from Urban One Honors in 2018.

Brandy Norwood is Unmarried. She has a daughter named Sy’rai Iman Smith born with an ex-boyfriend,  Robert “Big Bert” Smith.

She was in a relationship with future Los Angeles Lakers player Kobe Bryant in 1996 but the couple broke up soon. Later, she dated  Boyz II Men lead singer Wanya Morris and then dated the American rapper, Mase, for a while.

She was also romantically involved with producer Robert “Big Bert” Smith. On June 16, 2002, she gave birth to their daughter, Sy’rai Iman Smith but they separated in 2003.

In 2004, Brandy started a relationship with NBA guard Quentin Richardson and the couple got engaged in July 2004 but Brandy ended their 14-month engagement in September 2005. It was claimed that she had got his face tattooed on her back, which was later transformed into a cat after their separation.

In early 2010, she was romantically linked with singer Flo Rida but Brandy started dating music executive, Ryan Press at the end of that year. They got engaged in December 2012 but the engagement didn’t lead marriage. Brandy called off her engagement in April 2014.

Brandy Norwood is a beautiful black lady with a stunning look. She stands at a height of 1.7 m (5 feet and 7 inches) tall and her body weighs around 52 kg (115 lbs.). Her body measurements are 34-23-34 inches. She wears a bra size of 34C and her shoe size is 9(US). Her eye color is Dark Brown and her hair color is Black. Her sexual orientation is Straight.

Brandy Norwood has quite good earnings from her professional career as an R&B Singer.  She has also worked in some films and TV series which helps her to garnered additional income.  Her major source of earnings is her music career.  As of 2020, her net worth is estimated to be $14 million. There is no information about her salary.

Our contents are created by fans, if you have any problems of Brandy Norwood Net Worth, Salary, Relationship Status, Married Date, Age, Height, Ethnicity, Nationality, Weight, mail us at [email protected]