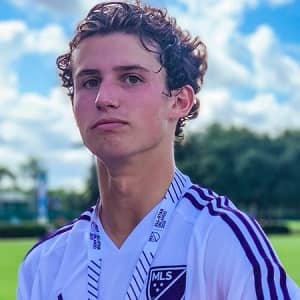 Brenden Aaronson is a professional soccer player from America. He is best known for playing as a midfielder for Philadelphia Union in Major League Soccer.

Where is Brenden Aaronson from?

Brenden Aaronson came to this world on October 22, 2000, in Medford, New Jersey, United States. He is American by nationality and is currently 19 years old.

Talking about his family and childhood, he was raised in Medford, New Jersey. However, there is no information about his parents’ names and siblings’ details.

Academically, Aaronson attended Shawnee High School for a year and went on to be selected to the Philadelphia Union’s YSC Academy. During his time there, he played soccer and completed his high school education.

How is the club career of Brenden?

During his earlier time at the YSC Academy, Brenden Aaronson played for Union’s youth teams before committing to Indiana University and signing an amateur contract with Bethlehem Steel FC. He appeared as an academy player for their 2017 season. Aaronson made a total of 21 appearances for the club and scored his first goal for the professional side against Atlanta United 2.

It was the year 2018 when he officially announced that he would join Philadelphia Union at the beginning of their 2019 season. The player scored his first professional goal in his MLS debut helping Philadelphia tie against Atlanta United on 17th of March, 2019. Coming to the end of the rookie season, Aaronson finished second for the 2019 MLS Rookie of the year, having scored three goals and two assists in over 1,640 minutes of playtime.

Which team does he represent internationally?

Brenden Aaronson no doubly proved himself as a strong rookie season. Following the success, he received his first senior call up to the United States men’s national soccer team in October for Concacaf Nations League matches with Cuba and Canada. Unfortunately, he didn’t earn a cap in either match. However, he earned his second call-up to the senior team for the 2020 January camp.

How tall is Brenden?

As a 19-year-old soccer player, it must be no surprise how he has maintained his such amazing body. Brenden Aaronson stands with a height of 5 feet 11 inches and weighs about 66 kilograms. Likewise, his body features of light brown hair and a pair of brown eyes as well.

Referring to the relationship status of Brenden, he is currently in a relationship. Likewise, according to him, he does have a girlfriend right now whose identity is yet to be disclosed. Furthermore, there is no information about his past love interests.

As of now, the player is just 19 years old and has established quite a good role for his team already. However, information regarding his value and fees isn’t disclosed by the club yet. Furthermore, he has an estimated net worth of around $1 million-$ 5 million as of the year 2020.

Talking about his social media presence, Brenden is a verified user on the Instagram platform with about 14.2 K followers to date. His fans can follow him on the username @baaronson7. Likewise, he is available on Twitter under the username @AaronsonBrenden which he joined in September 2018. The profile is able to accumulate about 1.6K followers to date.

Our contents are created by fans, if you have any problems of Brenden Aaronson Net Worth, Salary, Relationship Status, Married Date, Age, Height, Ethnicity, Nationality, Weight, mail us at [email protected]