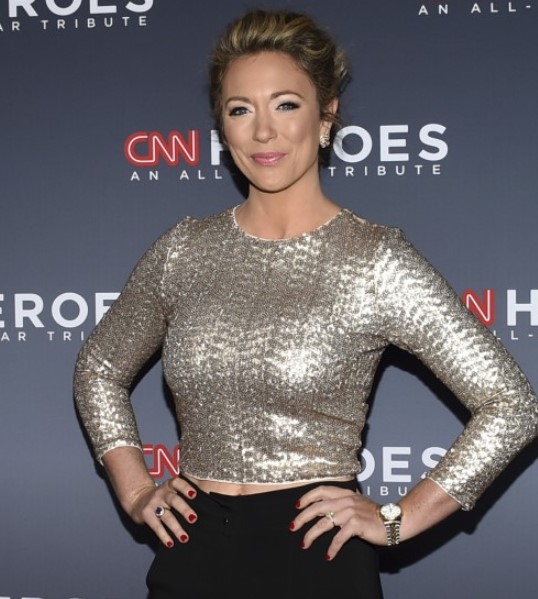 Brooke Baldwin is an American journalist and television host who is widely recognized as the host of “CNN Newsroom”. She has been working with CNN since 2008 covering many presidential inaugurations in her career. Brooke is also the host and creator of the CNN series ‘American Woman’. She is also a COVID-19 survivor patient.

What is Brooke Baldwin Famous for?

Where was Brooke Baldwin Born?

Brooke Baldwin was born on July 12, 1979, in Atlanta, Georgia, United States. Her birth name is Brooke Baldwin. Her nationality is American. Baldwin belongs to White ethnicity and is of Anglo-Saxon descent while Cancer is her zodiac sign.

Baldwin was born in a middle-class family as the daughter of Steven Robert Baldwin(father) and Christine King Fulton(mother). Her father worked as a consultant at Deloitte while her mother was a teacher. When Brooke was just 12, her mother died because of cancer.

Baldwin was raised in her hometown where she attended The Westminster Schools. Later, she joined the University of North Carolina at Chapel Hill and got graduated with bachelor’s degrees in Spanish in 2001.

She also graduated from the University’s Hussman School of Journalism and Media earning a bachelor’s degree in Journalism. Besides, she also studied abroad at the Universidad Iberoamericana in Mexico City.

Who is Brooke Baldwin Married to?

Brooke Baldwin is married to her long-time boyfriend, English producer James Fletcher. The couple met for the first time at a holiday party in 2015. Brooked made her relationship official by getting engaged in July 2017. Following that, in May 2018, Brooke and James got married at a wedding held at Hudson Valley, New York City.

Besides, on April 3, 2020, she revealed of being diagnosed with COVID 19, days after CNN colleague Chris Cuomo was diagnosed. Following her battle with the coronavirus, she shared an emotional essay recanting her struggles and sharing her path to recovery.

What is the Net Worth of Brooke Baldwin?

The 40 years old Brooke Baldwin has quite a great earnings from her professional career as a news anchor. Working in this field for more than a decade, she has managed to amass a million worth fortune from her several coverings and shows.

Her estimated net worth is around $1.3 million while her annual salary from CNN is around $600k.

How Tall is Brooke Baldwin?

Brooke Baldwin is a gorgeous lady in her 40s. Baldwin has a maintained slim body physique of measurement 36-27-36 inches. She stands tall with a height of 5ft. 10inch. while her body weighs around 67kg(148 lbs). She has a fair complexion with blonde hair and sparkling blue eyes. Her bra size is 34 B, while 8.5(US) is her shoe size and 10(US) is her dress size.

Our contents are created by fans, if you have any problems of Brooke Baldwin Net Worth, Salary, Relationship Status, Married Date, Age, Height, Ethnicity, Nationality, Weight, mail us at [email protected]