The son of David Beckham and Victoria Beckham, Brooklyn Beckham married his girlfriend of three years, Nicola Peltz. It was an extravagant marriage with many celebrities on the guest list. Know all the intricate details of this star-studded affair.

And on Monday, 11 April 2022, the newly Wed couple shared news and pics of their wedding on their social media. The first picture was a black and white pic of the two at their wedding. Both are in their wedding dresses and Brooklyn is leading the way holding Nicola’s hand. Another photo is of Nicola alone in which her flowing wedding attire is seen. In another photo that Brooklyn posted, he was with his father David and brothers Romeo and Cruz.

The attendees at the wedding

The couple exchanged wedding vows in front of their family and friends. Friends of David and Victoria also graced the occasion with their presence. The guest list was long and a reputed one. Serena Williams and Eva Longoria were present. Mother Victoria’s Spice Girl bandmembers-Mel B, Mel C, Emma Bunton and Geri Horner, and Gigi Hadid, Nicole Richie, Elizabeth Hurley, Tom Brady, and Gisele Bundchen were invited for the wedding to bless the young couple.

Nicola is an actress and has featured in Transformers: Age of Extinction and the TV series Bates Motel. Brooklyn was into modeling and did some photography. Last year, he said that he wants to be a chef.

More about the couple’s wedding and relationship

Nicola had worn a custom Valentino dress. She is 27 now and had chosen this dress after discussing with New York-based celebrity stylist Leslie Fremar. At the wedding and reception, Snoop Dogg was the DJ. Brother Cruz, 17 was the best man. And sister Harper, 10 was the bridesmaid. The ceremony was a Jewish one. And the couple has signed a prenuptial agreement that states that in case of a divorce, they will retain their own properties.

Brooklyn went public with his relationship with Nicola in January 2020. He proposed to her on 11 July 2020 and she said yes.

He posted a photo of him proposing his girlfriend and wrote below:

“Two weeks ago I asked my soulmate to marry me and she said yes xx I am the luckiest man in the world,”

“I promise to be the best husband and the best daddy one day ❤️ I love you baby xx.”

Brooklyn is 23 and has several tattoos in honour of Nicola. These include eyes on the back of his neck, a special love note from her, also her late grandmother’s name and a Hebrew tattoo. It reads:

Nicola has tattoo of Brooklyn’s name on her back. They are also wearing each other’s wisdom teeth as necklaces.

Who is Jessie J dating after her split from her ex-boyfriend, Channing Tatum? 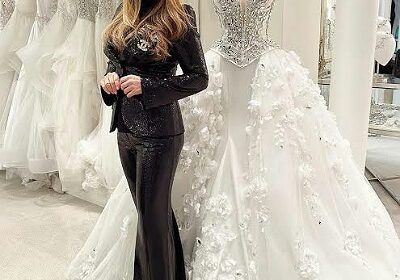