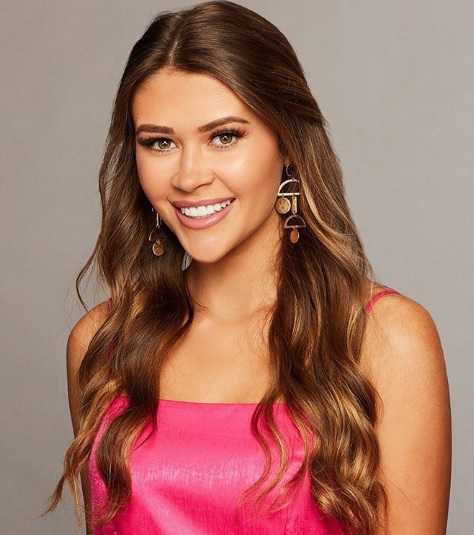 Caelynn Miller Keyes is an American professional model and social media consultant. She was one of the contestants of the 2018 edition of Miss USA, where she emerged as the first runners-up. Sarah Rose Summers, Miss Nebraska was crowned the Miss USA 2018. She was crowned Miss North Carolina thus representing North Carolina at the 2018 Miss USA. She is also the winner of 2013 Miss Virginia Teen USA.

She has garnered over 498k followers on her Instagram.

Caelynn Miller-Keyes Finishes Fourth And Bids Farewell To The Bachelor

Caelynn Miller-Keyes, 23, bid farewell to the 23rd season of The Bachelor, where she finished the show in the fourth place after she was eliminated by the Colton Underwood during the hometown dates portion of the show in the episode aired on 25 February 2019.

After the exit, she went on social media to express herself. She wrote on Instagram,

“Wow, it’s a weird thing watching yourself fall in love on TV. These past few months have been really difficult. I put my whole heart on the line and I fell in love with an incredible man in the strangest way.

Colton, thank you. You constantly pushed me and challenged me, and I walked away from all of this a better person.

Mom, John, and the entire fam, thanks for going through this wild journey with me. I love you all, and am so thankful you could be there during this.

No matter what happened, this was the best experience of my life and I came out stronger. Thank you all for letting me share my life with you. I appreciate the love and support”.

The Bachelor contestant from North Carolina, Caelynn revealed she was a victim of sexual assault in 2014. She spoke out on Monday’s episode that she and two of her friends were drugged and raped at a fraternity party in 2014. She stated that their wine was drugged and they woke up the next morning completely naked in bed, with no memory what happened last night.

“Tonight, I talked to Colton about my experience with sexual assault. Unfortunately, my story is a common one.

Every 98 seconds, an American is sexually assaulted.

Every 11 minutes, that victim is a child.

Only 5 out of every 1,000 perpetrators will end up in prison.

On average, there are 321,500 victims (age 12 or older) of rape and sexual assault each year in the United States”.

You deserve to be safe

You are not alone

If you or someone you love needs help, love, support or if you want to donate to help others:

Where is Caelynn Miller-Keyes from?

Caelynn was born on 15 November 1996. She was born to a father, Jerry Keyes, and a mother, Mona Keyes. Her birthplace is in Asheville, North Carolina in the United States. She holds American nationality. Her zodiac sign is Scorpio. She follows Christianity religion. She has two siblings, a brother, Tanner Austin Keyes, and a sister, Arianna Miller Keyes. She suffered from a serious illness that almost affected her ability to walk. She motivated herself to fight her illness and recovered from it later.

She attended Virginia Commonwealth University, where she graduated in broadcast journalism.

She finished the beauty pageant as the first runner-up.

She has actively participated in the campaign for policies to make it easier for college students to report sexual assaults. She always encouraged girls to come forward to fight against sexual assaults.

She has also worked as a social media consultant at Asheville, North Carolina.

She competed on the 23rd season of The Bachelor. It features former football linebacker, Colton Underwood. The show started on 7 January 2019.

She finished the show in the fourth place after she was eliminated by the Colton Underwood during the hometown dates portion of the show in the episode aired on 25 February 2019.

The 2018 Miss USA first runner-up, Caelynn is unmarried. As of 2019, she is only 23 years old young. She might be dating someone. No rumors regarding her affairs have surfaced yet.

Caelynn Miller Keyes has an estimated net worth of $500,000 as of 2019. She has earned her fortune working in modeling and television industry. She also earned competing in the beauty pageant competitions.

Our contents are created by fans, if you have any problems of Caelynn Miller-Keyes Net Worth, Salary, Relationship Status, Married Date, Age, Height, Ethnicity, Nationality, Weight, mail us at [email protected]