Callum James Hudson-Odoi is an English professional footballer who plays as a winger for Premier League club Chelsea and the England national team. 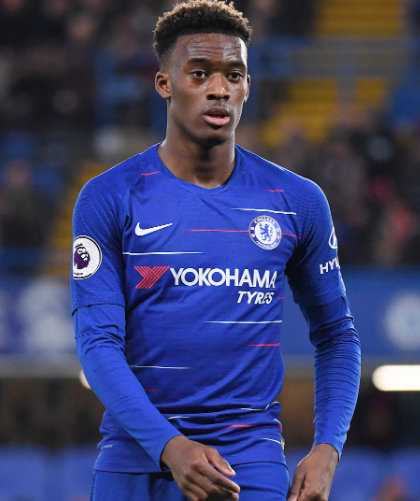 Callum James Hudson-Odoi, professionally known as Callum Hudson-Odoi is an English professional football player. He plays as a forward or winger for the Premier League club Chelsea and the England national team. He started his youth career at Chelsea’s academy and later made his professional debut from Chelsea in January 2018. He has represented various England, youth teams, before representing the senior international team in March 2019.

What is Callum Hudson-Odoi Famous For?

– The youngest player to debut in a competitive match for England.

Where was Callum Hudson-Odoi Born?

Callum Hudson-Odoi was born on 7 November 2000. His birth name is Callum James Hudson-Odoi. His birthplace is in Wandsworth, England. He holds English nationality. He has an older brother, Bradley Hudson-Odoi. He is the son of Bismark Odoi. His father is Ghanaian. He attended Whitgift School in Croydon.

He joined Chelsea Academy in 2007. He made his U18 debut in August 2016, where he scored 8 goals in 25 appearances throughout the campaign. He led the club to FA Youth Cup triumph.

Following the campaign, Chelsea promoted him to the U23 team. He was only 16-years old then. He scored 4 goals in three appearances helping the club to win EFL Trophy.

He was called up for Chelsea’s first team in EFL Cup in December 2017. However, he remained an unused substitute.

He made his first-team debut in the FA Cup against Newcastle United in January 2018. He came on as a substitute in the 81st minute.

He made his Premier League debut against AFC Bournemouth in the same month.

Chelsea manager Maurizio Sarri announced that he would keep Hudson-Odoi with the club’s first-team for the 2018-19 campaign.

He scored his career-professional goal against Stamford Bridge in November 2018.

German Club, Bayern Munich reportedly tried to sign Hudson-Odoi multiple times. Hudson-Odoi had put in an official transfer request in January 2019. However, Chelsea manager Sarri stated that Hudson-Odoi will stay at the club.

Chelsea complained about alleged racism aimed at Hudson-Odoi during a match against Dynamo Kyiv in March 2019.

He became the youngest player at the age of 18 years and 146 days to assist a goal on his first start for the club in the Premier League era. He assisted Olivier Giroud’s goal in his first league start against Brighton.

He suffered an injury to his Achilles tendon during a match against Burnley in April 2019. he was ruled out for the rest of the season.

Chelsea appointed the club’s legendary former player, Frank Lampard as their new manager. Hudson-Odoi said that he was hopeful about receiving a new contract with the club.

He led the England U17 team UEFA European U17 Championship final. He was named to the team of the tournament.

He led the England U17 team to win the 2017 FIFA U17 World Cup defeating Spain in the final.

He made his senior international debut against the Czech Republic on 22 March 2019. He came on in as a 70th-minute substitute.

He became the youngest-ever player to make his debut in a competitive match for England. He was 18 years and 135 days old at the time. In doing so, he broke the record set by Duncan Edwards in 1955 by 40 days.

He made his first start for England’s senior team against Montenegro in the same month. He became the second-youngest player ever after Wayne Rooney to start a competitive match for England.

UEFA European Under-17 Championship Team of the Tournament: 2017

Who is Callum Hudson-Odoi Dating?

Callum Hudson-Odoi is an aspiring English footballer. He is focusing on his professional football career. He is unmarried and reportedly single.

How Tall is Callum Hudson-Odoi?

Callum Hudson-Odoi stands at a height of 1.77 m i.e. 5 feet and 10 inches tall. He has a bodyweight of 75 kg. He has an athletic body build. He has dark brown eyes and his hair color is black.

What is Callum Hudson-Odoi Net Worth?

Callum Hudson-Odoi earns from his professional football career. His income comes from salary, contracts, bonuses, and endorsements. Chelsea is set to sign a lucrative deal with him ahead of the 2019-2020 season. The new contract deal would certainly increase his earnings and net worth in the coming years. His net worth will be updated soon.

Our contents are created by fans, if you have any problems of Callum Hudson-Odoi Net Worth, Salary, Relationship Status, Married Date, Age, Height, Ethnicity, Nationality, Weight, mail us at [email protected]