Cam Johnson is an American football player who plays as a defensive end. 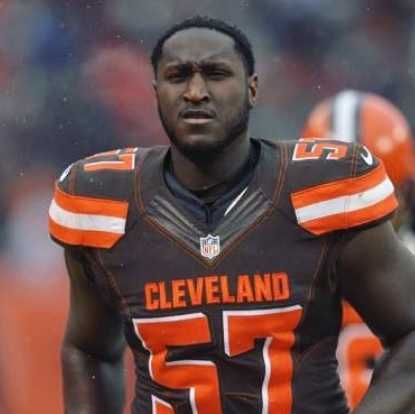 Cameron Isaac Johnson, professionally known as Cam Johnson is an American football player who plays as a defensive end. He is currently a free agent. He was drafted by the San Francisco 49ers in the seventh round of the 2012 NFL Draft. As of 2017, he has recorded 40 total tackles, 3.0 sacks, 1 pass deflections, and 2 forced fumbles in his NFL career. He played college football at Virginia.

Cam Johnson was born on 24 May 1990. His birth name is Cameron Isaac Johnson. Information about his parents and siblings are currently unavailable. His birthplace is in Washington, D.C. in the United States. He holds American nationality. He attended Gonzaga High School in Washington. He played both wide receiver and defensive back while at high school. As a senior, he caught 22 passes for 269 yards and two touchdowns.

Rivals.com considered him only a three-star recruit and rated him as the number 40 safety prospect in the nation. Various universities including Virginia, Syracuse, Pittsburgh, and Maryland offered him the scholarship. In the end, he committed to play college football at the University of Virginia.

As a freshman at Virginia, he played in 6 games, mostly as a reserve linebacker and on special teams recording 7 total tackles, including 2 tackles for loss.

The next year, he recorded 40 tackles including 5 tackles for loss and 2 sacks in all 12 games.

In his final season at Virginia, he recorded 30 total tackles, including 11 tackles for loss, 4 sacks, 2 forced fumbles.

San Francisco 49ers drafted Johnson in the seventh round with the 237 overall picks in the 2012 NFL Draft.

San Francisco 49ers traded him to the Indianapolis Colts in exchange for a conditional draft pick on 2 September 2013.

The Colts waived him in September 2015.

The Browns waived him in September 2016.

He was signed to the Arizona Cardinals’ practice squad in September 2016.

The Browns again signed him to their practice squad in October 2016.

Detroit Lions signed a reserve/future contract with him on 8 January 2018.

Who is Cam Johnson Married to?

Cam Johnson is a married man. We can see Johnson sharing pictures with his wife on his Instagram. There is not much official information available about his personal life.

What are Cam Johnson’s Body Measurements?

Cam Johnson stands at a height of 1.93 m i.e. 6 feet and 4 inches tall. He has a body weight of 268 lbs i.e. 122 kg. He has an athletic body build. His other body measurements are currently unavailable.

What is Cam Johnson’s Net Worth?

Cam Johnson, a defensive end from Washington has not achieved much success in his NFL career. Though the 49ers drafted him in the 2012 NFL draft, he hasn’t succeeded to become one of the popular players in NFL. His main source of income is playing football. However, he is a free agent at present. His net worth is not available at present.

Our contents are created by fans, if you have any problems of Cam Johnson Net Worth, Salary, Relationship Status, Married Date, Age, Height, Ethnicity, Nationality, Weight, mail us at [email protected]