Cameron Jordan Johnson, popularly known as Cameron Johnson is an American college basketball player who plays in the small forward position. And , he is a professional American basketball player who last played for the North Carolina University team North Carolina Tar Heels as their small forward. He also played for the Pittsburg Panthers Men's national team. Cameron Johnson and is currently playing in Phoenix Sun since 2019 to this day. 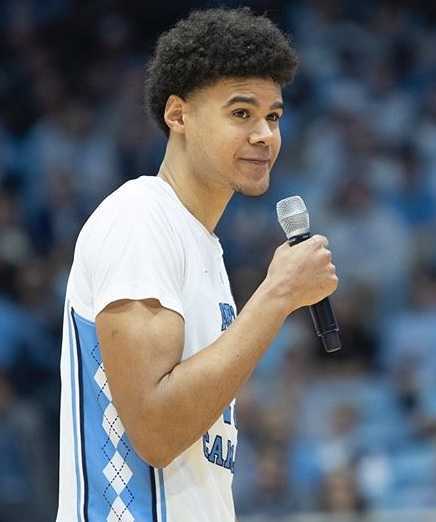 Cameron Jordan Johnson, popularly known as Cameron Johnson is an American college basketball player who plays in the small forward position. He currently plays for the North Carolina Tar Heels men’s basketball team at the University of North Carolina. He transferred to UNC after graduating from the University of Pittsburgh. He played collegiate basketball at Moon Area High School and Our Lady of The Sacred Heart High School  He has garnered over 47.2 followers on his Instagram.

Cameron Johnson who transferred to UNC from Pittsburgh helped his Tar Heels team to win over Louisville in ACC Tournament. The 23-year old, Johnson was one of the three Tar Heels players who averaged over 14 points against Louisville. Johnson posted 14 points in the first half to take the 45-35 lead before the half time. Luke Maye and Coby White scored game-high 19 points each for the Tar Heels. The Tar Heels defeated Louisville 83-70 and advanced to the semifinals of the ACC Tournament. All credit goes to Johnson’s performance in the first half.

Cameron Johnson was born on 3 March 1996. His birth name is Cameron Jordan Johnson. His birthplace is in Moon Township, Pennsylvania in the United States. He holds an American nationality. Information about his parents and siblings are currently unavailable.

He attended Moon Area High School and Our Lady of The Sacred Heart High School. At Sacred Heart, he averaged 27.8 points, 8 rebounds, and 5 assists per game.

He finished high school with 1,175 points.

He committed to play for the Pittsburgh Panthers men’s basketball team of the University of Pittsburgh.

He signed with Pittsburgh in April 2014.

He missed much of the season due to injury and was forced to redshirt his freshman year.

As a redshirt sophomore at Pittsburgh, he averaged 11.9 points per game and hit 41.5% of his three-point attempts.

He graduated from Pittsburgh in three years.

He moved to North Carolina without sitting out a year taking advantage of the graduate transfer rule. He cited uncertainty in coaching and a losing record as factors in his decision to transfer.

He had to sit out ten games only after five days after his team’s season opener. He had surgery to fix a torn meniscus on 15 November 2017.

As a redshirt junior at UNC, he finished third on the team in scoring with 12.4 points per game and 4.7 rebounds per game.

He scored a career-high 32 points against Clemson.

He underwent an arthroscopic hip procedure after the season.

Who is Cameron Johnson Dating?

There is no official information about his personal life. He is reportedly unmarried and single as well. He might be dating someone. No rumors about his relationship affairs have surfaced yet.

What are Cameron Johnson’s Body Measurements?

Cameron Johnson stands at a height of 2.06 m i.e. 6 feet and 9 inches tall. He has a bodyweight of 210 lbs i.e. 95 kg. He has an athletic body build. His other body measurements are currently unavailable. He has dark brown eyes. He has curly black hair.

What is Cameron Johnson’s Net Worth?

Cameron Johnson has yet to play professional basketball. After his tenure at North Carolina, we might see him playing in the NBA. If he plays in the NBA, basketball will be his main source of income. As of 2019, his net worth is unavailable.

Our contents are created by fans, if you have any problems of Cameron Johnson Net Worth, Salary, Relationship Status, Married Date, Age, Height, Ethnicity, Nationality, Weight, mail us at [email protected]