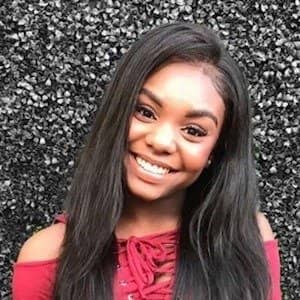 Camryn Bridges is a dancer at the group B. Elite Dance Academy from America. She is well known for performing in the seventh season of the famous reality dance competition show ‘Dance Moms’.

Where is Camryn Bridges from?

Camryn Nevaeh Bridges was born on May 11, 2002, in St. Louis, Missouri, US. She is American by nationality with African-American ethnicity and is currently 18 years old. Talking about her family and childhood, She was born to parents Camille Bridges (mother) and Ryan Bridges (father). Camryn has two siblings, a sister named Ryleigh and a brother named Ryan Jr. Nevaeh Bridges. She lived most of her childhood days in the place she was born in, St. Louis, Missouri, US. She had an interest in dancing since the young age of nine.

How did Camryn Bridges rise to stardom?

Camryn Bridges made into the Tv industry by guest-starring in the TV series, ‘JoJo’s Juice’ back in 2015, .She rose to her current fame after her appearance in the reality dance competition show, ‘Dance Moms’. Camryn showed her first appearance on the TV show at the Atlanta auditions in No One is Safe in Season 4. Furthermore, she came back for the seventh season as a solo dancer where Camryn was invited to join the elite team, after being called back from Abby’s and the Dance Moms audition process.

Furthermore, She was finally made a permanent stable member and remained on the team until Ashlee’s Big Decision Part 1. However, she and the other elite dancers decided to leave the ALDC and form The Irreplaceables. The dance routine, ‘We Go On’ is one of her best group performances alongside the likes of Nia Frazier, Brynn Rumfallo, Daviana Fletcher, Kalani Hilliker, and Kendall Vertes. Bridges appeared featuring in Kendall’s music video of ‘Where Would I Be Without You’ in 2017.

Additionally in Camryn’s modeling career, She has modeled ‘True Joy Active Wear’ which was founded by AUDC winner McKaylee True and her mother. Although she is perfect as a group dancer, on the other hand, her mother wants to make her a great soloist. Furthermore, Camryn launched her own self-titled Youtube channel on November 3, 2014. She has crossed over 5.9 million views on her booming channel.

What is Camryn Bridges’s net worth?

For Camryn Bridges’s net worth and salary, Camryn hasn’t shared much information about her salary. However, being a reality TV star she could earn around $45k a year on average. As of 2020 from several media sites, her estimated net worth of around $100k – $1 million.

what is the body measurement of Camryn Bridges?

As a beautiful and good looking star, Camryn Bridges has maintained quite an attractive body figure standing at the height of around 5 feet 6 inches. Likewise, She has black hair and dark brown eyes reflecting her bold but humble persona. She has not shared further information about her weight and other vital body statistic measurements.

Is Camryn dating anybody at the moment?

Referring to the dating life, Camryn Bridges is not dating anyone at the moment. Camryn is 18 years old and is mainly focused on establishing her career. Moreover, Camryn Bridges had at least 1 previous relationship but has not been engaged.

Furthermore, Camryn has not involved in any controversies. She has kept herself away from any type of controversy and scandal in her career. Likewise, there are no rumors about her of any kind in the public domain.

Our contents are created by fans, if you have any problems of Camryn Bridges Net Worth, Salary, Relationship Status, Married Date, Age, Height, Ethnicity, Nationality, Weight, mail us at [email protected]