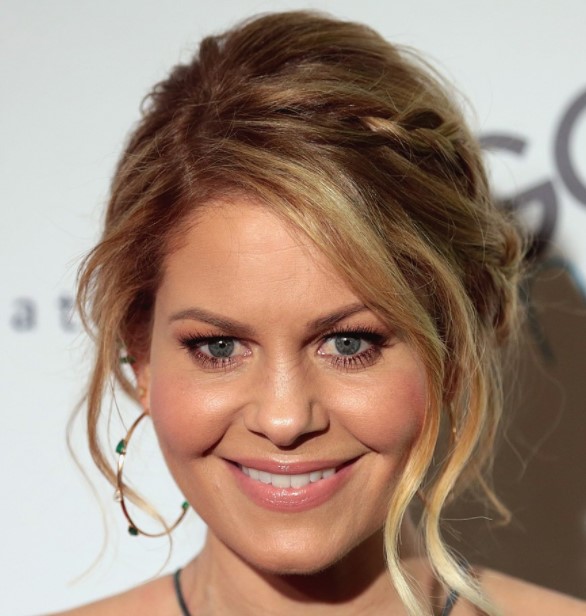 Candace Cameron Bure is an American actress, author, producer, and reality television star. She is best known for her role as DJ Tanner on the television sitcom Full House. She has received the award for Favorite Television Actress by Nickelodeon Kids’ Choice Awards and been nominated several times for Young Artist Awards in various categories for her excellent role as D.J. Tanner in Full House.

She is also the author of “Reshaping It All: Motivation for Physical and Spiritual Fitness,” which was released in January 2011 and became a New York Times bestseller.

She is also active on social media, with over 4.4 million Instagram followers @candacebure and over 586.8 million.

Candace Cameron Bure is known for what?

On the television sitcom Full House, she played DJ Tanner.

Candace Cameron Bure was born in the United States.

She is of White origin and has an American nationality. Her ancestors are Scottish, English, German, and Dutch. Aries is her zodiac sign. She is a devout Christian.

She went to Nevada Ave Elementary School in West Hills, Los Angeles, California for her studies.

Candace Cameron Bure started acting when she was five years old. She began her career by appearing in a number of television advertisements. ‘St. Elsewhere’ (1982), ‘Punky Brewster’ (1985), ‘Growing Pains’ (1987), and ‘Who’s the Boss?’ are among her early television series guest appearances (1987).

On the ensemble sitcom ‘Full House,’ she played Donna Jo ‘DJ’ Tanner, the oldest daughter, in 1987. She was a member of the ensemble cast for the entire run of the show, which ended in 1995.

She and her Full House co-stars Dave Coulier and David Faustino hosted the Nickelodeon Kids’ Choice Awards in 1990. In 1994, she co-hosted the awards show with Joey Lawrence and Marc Weiner, becoming the first person to do so twice or more.

Full House, an ABC sitcom, ended in 1995. She then appeared in the television series Sharon’s Secret and Visitors of the Night in the same year. She has appeared as a guest star on the sitcoms ‘Cybill’ and ‘Boy Meets World.’

She served as an interviewee on the I Love the ’80s and I Love the ’80s Strikes Back retrospectives in the early 2000s. She also co-hosted the E! network’s ’50 Cutest Child Stars: All Grown Up,’ with Keshia Knight Pulliam.

In 2007, she appeared in the episode Teacher’s Pet of the supernatural sitcom ‘That’s So Raven.’

She appeared in the Hallmark Channel’s television film ‘Moonlight and Mistletoe’ in 2008.

She appeared as Summer Van Horne in the comedy-drama television series ‘Make It or Break It’ in 2009.

Along with choreographer Mark Dallas, she competed in the 18th season of the celebrity dance reality show ‘Dancing With the Stars’ in 2014. Their dancing abilities were praised on the competition, and they placed third behind Amy Purdy and Meryl Davis, who came in second and fourth, respectively.

Bure was scheduled to reprise her role as D.J. Tanner in the 2016 Netflix spinoff series ‘Fuller House,’ which was announced in 2015. Filming started in July 2015, and the show was a huge success. The show was also renewed for a second season. On June 2, 2020, the series came to an end.

In 2015, she co-hosted an American talk show called The View.

Candace revealed her departure from The View on December 8, 2016, due to commitments with Fuller House and Hallmark Channel projects.

In the adaptations of Harris’s novels as an original film series entitled The Aurora Teagarden Mysteries, as part of their ‘Mystery Wheel’ umbrella series, she played Aurora Teagarden, a fictional character created by author Charlaine Harris. Hallmark Movies & Mysteries airs the films in the United States.

Candace Cameron Bure’s first novel, “Reshaping It All: Inspiration for Physical and Spiritual Health,” was a New York Times bestseller when it was released in January 2011.

In January 2014, her second novel, Balancing It All: My Tale of Juggling Priorities and Meaning, was published.
Dancing Through Life: Steps of Courage and Conviction, her third novel, was released in August 2015.

In April 2018, she released her fourth novel, Kind is the New Classy: The Power of Living Graciously.
Awards and nominations for Candace Cameron Bure

Nickelodeon Kids’ Choice Awards presented her with the award for Favorite Television Actress in 1994.
For ‘Fuller House,’ she won the Teen Choice Awards for Choice TV Actress Comedy in 2016.

For ‘Fuller House,’ she received a Teen Choice Award in the category of Choice TV Actress Comedy in 2017.
Husband of Candace Cameron Bure

Candace Cameron Bure has a husband.

Valeri Bure, a Russian NHL hockey player, is her husband. Candace’s Full House co-star Dave Coulier introduced them at a charity hockey game in 1995, and they began dating in 1995. On June 22, 1996, the couple wed. They have three children together: Natasha Bure, a daughter, and Lev Bure and Maksim Bure, two sons.

Candace Cameron Bure’s son Lev Bure got engaged to his girlfriend Taylor Hutchison on August 29, 2020. Candace announced the good news on Facebook. She expressed her joy to her Twitter followers. She wrote in the caption: “She replied with a resounding YES!!! My son, Levbure, proposed to Taylorrhutchison Ring last night. We can’t wait to see these cuties!!! #Involved! And this mama/mama-in-love is looking forward to the wedding planning chaos. Glasses clinking Bottle with a cork that pops Heart that is growing!!!”

Candace Cameron Bure is a stunning woman with a well-maintained Hourglass figure. She has a slender physique. She stands 1.57 meters (5 feet and 2 inches) tall and weighs about 51 kilograms (112 lbs.). 34-26-35 inches is her body measurement. She has a 34B bra size and a 6 dress size (US). She wears a size 6.5 shoe (US). Her eye color is Blue, and her hair is Blonde. Straight is her sexual orientation.

Candace Cameron Bure has quite good earnings from her professional career as an actress and reality television star. She is also the author of the New York Times bestseller book “Reshaping It All: Motivation for Physical and Spiritual Fitness”. Her major source of earnings comes from her acting career.  As of 2020, she has a net worth of $14 million. There is no information about her salary and other assets.

Our contents are created by fans, if you have any problems of Candace Cameron Bure Net Worth, Salary, Relationship Status, Married Date, Age, Height, Ethnicity, Nationality, Weight, mail us at [email protected]