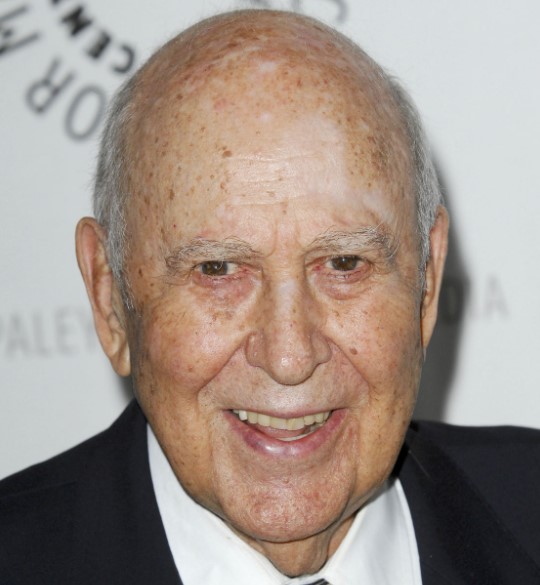 Carl Reiner was an American actor, comedian, director, screenwriter, and author who was best known for his work as the creator, producer, writer, and actor on a popular television sitcom, “The Dick Van Dyke Show”. Having started his professional career since 1947, Reiner was active in the field of the show business for several decades around 73 years until he died on June 29, 2020,

Reiner was also known for his partnership with Mel Books together with whom he worked as a writer and comedian starting in 1950 with Sid Caesar’s “Your Show of Shows”. Throughout his long journey, Reiner was able to gather several awards and honors including 11 Emmy Awards, 1 Grammy Award, and the Mark Twain Prize for American Humor.

He was also inducted into the Television Hall of Fame in 1999. Besides, Reiner was active on Twitter until the day of his death, becoming one of the oldest celebrities active on the platform with over 384k followers on his account: @carlreiner.

What was Carl Reiner Famous for?

Where was Carl Reiner Born?

Carl Reiner was born on March 20, 1922, in the Bronx, New York City, United States. His birth name was Carl Reiner. His nationality was American. Reiner belonged to White ethnicity while Pisces was his zodiac sign.

Carl was born as the youngest son in a middle-class family to a watchmaker father, Irving Reiner, and a housemaker mother, Bessie Reiner. His parents were Jewish immigrants also his father was from Austria and his mother Romania. He grew up along with his older brother, Charlie Reiner who served in the 9th Division in World War II and got killed for the country, his ashes are buried at Arlington National Cemetery.

When Carl was 16, his brother, Charlie told him about a free drama workshop which was the first step towards his successful career. Carl was working as a machinist repairing sewing machines at the time. Also, his uncle Harry Mathias was the first entertainer in his family.

When Did Carl Reiner Die?

Carl Reiner died on June 29, 2020, at age of 98, at his home in Beverly Hills, California, U.S. Reiner died because of a natural cause in the presence of his family. Just two days before he passed away, Riener tweeted a tribute to his late wife writing, “Nothing pleases me more than knowing that I have lived the best life possible by having met & marrying the gifted Estelle(Stella) Lebost”.

Carl Reiner got married once throughout his life till the age of 98. Reiner’s only marriage was with Estelle Lebost. She was a popular American actress and singer who was also described as matriarch of one of the leading families in American comedy. Reiner and Lebost got married on December 24, 1943, at a grand wedding, when Reiner was just 21 and Lebost was 29 already.

Despite the age gap of 8 years, the couple managed to live a happy life for around 64 years until Lebost’s death on October 25, 2008, at age of 94. They had 3 children and all of them have a great career in the show business. Their first son, Rob Reiner, born in 1947, is currently a popular actor, comedian, and filmmaker.

They welcomed their second child, a daughter, Annie Reiner in 1949, who is also an author, poet, and singer. Their third and last son, Lucas Reiner was born in 1960, who is a popular painter, photographer, and director.

Besides, Reiner was a Jewish atheist who developed the atheistic viewpoint as the Holocaust progressed. He was also a lifelong Democrat and had endorsed Bernie Sanders for the Democratic Party nomination during the 2016 United States presidential election.

What was the Net Worth of Carl Reiner?

Carl Reiner had quite great earnings from his professional career as an actor, comedian, director, and author. Having had a long-term career span of almost 73 years, Reiner had managed to amass a million worth fortune from his several works during the early 1960s, 70s, 80s, and 90s.

His net worth was estimated to be around $70 million. With his million worth fortune, Reiner lived a luxurious healthy lifestyle until his death at the age of 98.

How Tall was Carl Reiner?

Carl Reiner was a good looking man in his mid-90s until he died on June 29, 2020. Reiner had a great personality and charm that he became able to last long in the world of entertainment. He had a height of 1.87m while he had a bodyweight of around 70kg.

Our contents are created by fans, if you have any problems of Carl Reiner Net Worth, Salary, Relationship Status, Married Date, Age, Height, Ethnicity, Nationality, Weight, mail us at [email protected]